While the previous generations were highly motivated with promotions and hierarchical positions of power, Gen Z may not be. More inspiring for them would be; being contributors, being heard, valued, respected and acknowledged. It is best for the leaders to transform now, and HR will have to facilitate this metamorphosis of a caterpillar to a butterfly.

We have for ever lived in hierarchy. We had Rajwadas, Rajas and Ranis, and then the Maha Mantri, the Mantris and the Peshwas. Then came the Queen from land-afar and took the whole hierarchical bit a hundred notches higher. And, in spite of being in a democracy for the last 70 odd years, we still remain deep-rooted in hierarchy. Organisations are legal entities, and yet we have similar hierarchical structures that define many aspects from decision-making, office-cabins, cafeterias (esp. in manufacturing) and even the parking lot. In some places, even the washrooms are hierarchical rules of entry. Ironically, while people speak against discrimination, the same people aspire promotions not for the challenge of the enhanced deliverables or for the sense of leading people, but mostly for the 'power' that they would enjoy in those positions.

However, as Bob Dylan professed in the 60's in his song, The Times They Are A-Changin', especially the part featuring the lines Come mothers and fathers. These lines are bang on the money when we look at Gen Z (also called as iGen) who have recently joined organisations or will be joining in the next few years. They are not going to really adhere to hierarchy, levels, bands or power with the same comfort as the older generations. Chances are, if they see hierarchy, they are going to vamoose even before that word is spelled out! Another aspect today is 'meetings are life' in most organisations. In the workshops that are facilitated by me, especially for conglomerates, I have been commonly hearing Managers claiming that for at least 3/5th of the time, they are either in meetings or calls. And, in the Indian context, most of these meetings are held in a highly autocratic mannerusually talk, high control, and hierarchal decision-making by the Manager/Leader who has position and power over others. Thus, a connect in built through a generous display of public hierarchy and meetings.

The moot point, therefore, is how we can create an experience for the Gen Z, who are bound to resist hierarchy, and are yet integral in our meetings. The answer lies in changing the very way we lead meetings- to lead them in a facilitative manner. The word facilitation is derived from the Latin word 'facile' which, simply translated, 'to make easy'. And, a facilitator is therefore someone who makes something easy for the others. In other words, the Manager will have to metamorphose himself from being a leader to a facilitator in a meeting.

1. Time of the meeting: It is good to have meetings when iGens are at their best. Early mornings may perhaps be the worst time for meetings to be productive. Research shows that Gen Z sleeps quite late - they spend much more time on phone and on social platforms, connecting with the masses, and this is going to make many of our new gens turning in late to office with blurry eyes. 'Early bird gets the worm' is not an inspiring quote anymore.

2. Throw out the Agenda: The very word agenda in itself has so much bureaucracy attached that it can freeze the brain to boredom. Call it Desire Outcome (DO) of the meeting, and simply articulate what is desired at the end of the meeting. The hows can be co-created in the first five minutes of the meeting itself.

3. "WOW's" (Ways of Working): This gets done once in every cohesive meeting group. It is important for Gen Z to know how the group decides to work in the meeting. How do we bring up difference of opinions without getting into arguments? How can the group bring back focus to the DO when there is diversion? What are the digital etiquettes to be followed? How does follow-up happen? Who takes responsibility of what? How can they contribute without feeling mocked at, when they come up with outlandish ideas? How will basic questions be treated by the experienced members in the group?

4. Neutral Facilitator: A good idea is to actually have a member designated as a facilitator. This takes away the pressure from the Leader to facilitate. One may have to upskill facilitation abilities of every member to be able to have a different facilitator every meeting. If that is not possible then the Leader needs to be as neutral as he can. Avoid controlling the meeting - learn to speak last.

5. Small teams within the meeting group - If the group size is more than 5, then in order to encourage Gen Z to speak-up comfortably, make small teams of 3, so that they can individually reflect at first, then contribute in the small team, and then collate or prioritize the thoughts as a team for the consumption of the whole group. It is also important to get the groups to mix these small teams up so that diversity and new formations will also engage the members.

6. Integrating the late-comers: It is invariable to have Gen Z walking in late for the meeting. Rather than being a teacher and de-energizing the atmosphere at that point in time, the Facilitator should just ask one of the team members or the group members to bring the person up-to-speed. This also leads to sum-ups that actually helps the group converge the thoughts that came up till that point of time. If there is a need to make the Gen Z understand the ill-effects of latecoming, then the Leader needs to manage it separately through a 1-to1 feedback

7. The Divergence and the Convergence Tools: Build awareness of facilitation tools that make people participate, collaborate, co-create and then converge for decisions to move ahead. Resources such as International Association of Facilitators Methods database, amazing free resources etc. need to be checked out.

8. Meeting Materials: Often a meeting cannot be facilitated because of non arrangement of materials that support facilitation. Materials such as Post-It Notes, Flipcharts, Sticky Wall, Coloured paper, Chisel Markers (cheaper than white-board markers), Abro white-paper tapes to affix charts without damaging the walls etc. may be arranged in advance. Moving away from PPT driven or Blah-Blah (JustTalk) meetings will be important from the perspective of engaging the new gens.

9. Embarrassing pin-points: It is best to avoid asking specific questions to specific members. For instance, saying, "You are an Engineer from so and so college, you surely should have some thoughts/ideas around this. Don't you?" This can be really embarrassing to the Gen Z and would deflate them easily.

10. Pause: Pause is uncomfortable. When Leaders ask for ideas and then if there is a pregnant pause in the group, the Leader tends to answer. Let the pregnancy go its full term or beyond - no 'caesarean' here!

11. Experience: Beware the 'pious altar' of experience - many thoughts Wisdom. This would really engage and make the Gen Z feel wanted and contributing in an organisation and ideas have been slaughtered here. The idea may seem to have come up before, however, the time now could be fertile for it to nurture. Bring it up as one of the points of WOW's

12. Believe in collective wisdom: It is important that the Leader believes in Facilitation; have a belief in Group Wisdom. This would really engage and make the Gen Z feel wanted and contributing in an organisation.

13. Appreciation: Cynicism is a default-drive in a hierarchical set-up. A Leader needs to appreciate people now more so than ever. For the Gen Z who live their world with the number of "Likes" on Facebook and/ or Instagram, not getting a Like from their Boss will be demotivating. Maybe the Leaders will have to carry 'Like labels/stickers' that can be handed over to the Gen Z. And meetings are public forums to hand these over with pomp.

While the previous generations were highly motivated with promotions and hierarchical positions of power, Gen Z may not be. More inspiring for them would be; being contributors, being heard, valued, respected and acknowledged. It is best for the leaders to transform now, and HR will have to facilitate this metamorphosis of a caterpillar to a butterfly. 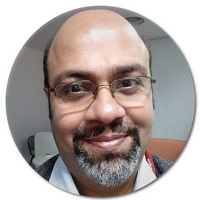 SHARE
Ajit K. Kamath is the Principal Enabler at WizTalks Management Consultants. He is one of the Founders of the India Chapter of International Association of Facilitators (IAF-India) and has been the Regional Director of Asia Region. He can be contacted on [email protected] or [email protected]