The history of invisible ink goes back to more than 2,000 years and was used by the Greeks and Romans. The first record of its existence and usage has been made by Pliny the Elder in the first century AD, who in his book, Naturalis Historia (Natural History), mentioned that the milk of Tithymalus plant was used as invisible ink. Invisible ink was thereafter used during the Renaissance era and also during the two World Wars. To avoid detection when intercepted, the Generals wrote instructions in indelible ink, followed by an insignificant blank paper on which the superimposing real message would be written in invisible ink!

However, the period post the industrial revolution saw the emergence of structured organisations. This followed an increased usage of 'invisible ink.' One actually wonders the connection between the two! Whilst every organisation has a written set of formal norms which guides them, equally critical for success in each of these companies are the parallel rules written in 'Invisible Ink' that one needs to seriously observe. Success thence is a collective outcome of the Written and the Unwritten Rules of the game.

If one is behind the wheel of the Corporation, it counts to understand the unwritten rules. One cannot afford to be merely wise and not street smart due to the aftermath of the persisting competition. The ocean is full of happy fishes, but it also has its share of sharks!

Heeding by the unwritten code

Most new leaders—otherwise successful—who join at the top tend to fail because they do not pay heed to understand the Unwritten Rules (URs) of the new company. These 'URs' actually reflect the true DNA and character of the organisation. They mirror the beliefs and the real- time style of working of the owners, the Board, and the top management.

You may follow the written code to the best possible extent, and expect to be rewarded, but you soon realise that you may have unknowingly disturbed some powers that be by not following the unwritten code. By disturbing the unwritten agenda, you triggered the shark's attention on you.

Every company is unique, and by assuming that all URs are the same, a new leader would be committing a major blunder. The 'Change Masters', mandated to lead transformational journeys for their enterprise hardly taste success when they show their mastery over the formal. Real success comes when the wise and street-smart 'Change Masters' are able to percolate the underlying power network of the organisation, and influence a change in the unwritten codes.

Scott-Morgan has rightly said that the Power authors transform the formal signals sent out in the organisation—reinforcing them, undermining them, twisting, and at times, torturing them until the original management actions and written rules have a complete set of parallel unwritten rules, that drive the day to day actions and behaviours. This holds true everywhere. Did we not recently hear of a borrowed aeroplane being recalled when the unwritten code of the game was not followed!

Whilst several competency models identify the success criteria for career success, not many have clearly identified this. Let me draw from my experiences of working a long innings in classic family enterprises and also in marquee MNCs and share with you my earnings ... ceteris paribus, he who is Street smart is the winner - the one with a deep power perception, the ability to hear the unspoken, and read the unwritten signals that prevail on the breathing tracks of the company. The DNA of an enterprise is indeed written in Invisible Ink ! 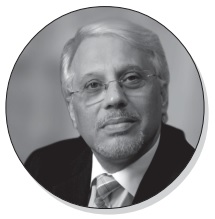 SHARE
Dr. Adil Malia is an eminent thought leader in the corporate transformation, people and leadership space. He is currently CEO of 'The FiRM' - Firdose, Robin & Malia LLP., which is a business management consultancy & advisory company. Adil has worked across diverse companies like Godrej, GE, Coca-Cola, Al-Futtaim, Essar, and has over three decades of corporate experience in board-level positions. He has several degrees in commerce, law and management. Apart from being a renowned keynote speaker, facilitator and trainer, Adil is also a doodler on social media, plays the Mohan-veena and is an avid reader.