The causal connection between workplace habits and career growth is evident and all-pervasive.

Small things often matter a lot, particularly when they are repeated frequently. Habits qualify as one of those small things which have a profound impact on outcomes.

Habits are usually formed or acquired over a long period of time. Once perfected, they remain as our companions and allies. They become so commonplace that we don’t even think of the powerful behavioural patterns that emanate from them. Habits have little to do with our inborn character, and cultivating them is a matter of choice.

Studying habits is a great aid in understanding people, their behaviour, responses, success and missed opportunities. Habits are those underlying exercises that build the ability muscles. Good habits are about developing small, healthy, frequent routines. We then need to stick to the chosen routines until they become habitual and effortless.

There are several intriguing aspects of habits – both good and bad, desirable and undesirable – that are worth examining and understanding. The genesis of a habit can occur in response to or in the absence of a need. During the early stages of life, when habits are formed, some important drivers are one’s social environment, the company one keeps, and one’s individual worldview. Later on, it’s interesting to see out-of-place behaviours and responses of otherwise effective and capable people predicated by a seasoned habit.

From a long list of commonly observed habits, let’s examine listening as a small habit that is desirable and good. Active and careful listening is widely regarded as a virtuous social habit and a sign of politeness. To listen properly is effortless, simple and natural. Yet, we often encounter people who habitually interrupt others in the middle of their sentences, claiming they already understand what the other person is saying. They start replying with limited or no understanding and their responses are likely to be inadequate. More often than not, someone with a habit of not fully listening to others does not correctly comprehend the point being made.

On the surface, it appears to be a minor lack of mannerism that is sometimes innocent and unintentional. However, the magnitude of the loss or damage caused to oneself due to this well nurtured habit is enormous during a lifetime. In verbal transactions, this individual never receives the full benefit that others are willing to offer. Most of the time, partial understanding coupled with conjectures render their responses sub-optimal. When it reaches obsessive levels, others avoid engaging in conversation with them. The aggregate loss of value being inflicted on oneself due to this innocuous habit is beyond estimate. Listening with patience, full comprehension, and deliberate response from all participants significantly enhances the quality and value of any conversation.

There are several small habits that people acquire at various stages of life. Despite obvious evidence, many people fail to consider the consequences and impact of their habits carefully. Some of these habits include ascribing reasons of failure on others, not accepting mistakes, taking a casual approach towards timelines, not meeting commitments, not closing communication loops, walking into meetings late, showing up without adequate preparation, hiding facts or information, speaking half-truths, being loud, being obsessed with self-praise, engaging in loose talk, and gossiping about others’ personal matters. The list is extensive when we look around.

Similarly, the list of polar opposites is also equally long: respecting other people’s time, fulfilling commitments, being dependable, showing gratitude, having an eye for details, helping others, accepting mistakes honestly, being cheerful, smiling, and learning from good and bad experiences. Labels for such habits can be broad or granular depending on the context, but these are generally universal classification regarding whether they are desirable or not.

Evaluate and Reflect on Your Habits

Think of it: life is made up of a series of habits in the form of (semi) automatic choices and decisions that surround us every day. By way of careful evaluation, they become visible. People are prisoners of their habits, knowingly or otherwise. Most of these habits stick with us, defining our character and personality. A few of them do sometimes change, particularly when we go through life-changing experiences.

The human mind is programmed to find ways to save energy. When a habit is formed, the brain stops fully participating in decision-making. So, unless you deliberately fight an existing habit, the loop will continue, and patterns will emerge automatically.

It is worthwhile to carefully examine and reflect on our armour of habits, their genesis, impact and the need for change. Most of the time, it is possible to alter events around us in life and career if we correctly understand the causal relationships of variables. Initiatives and actions are within our control to influence responses that we seek from others.

Careful thinking through and modification of personal habits (consciously and not as a forced veil) profoundly impacts effectiveness, relationships, and results. An aggregate of many small items becomes big in toto; the same is true about our small everyday behaviours emanating from habits.

Let us zoom in on workplace behaviours and their impact on shaping careers. Managers, for instance, have a collection of habits that makes them effective. They invariably put these habits into practice and apply these as everyday workplace behaviours. Not wasting time is an example. They are able to do more in the same span of time as their peers who are not as conscious of the usage of their time.

Dependability is a great virtue in corporate careers. Effective managers value dependability as a characteristic among their team members. It brings certainty, definitiveness and predictability in planning, execution and outcomes. High achievement orientation Managers detest surprises against their plans. Managers tend to assign critical tasks to dependable team members. It fosters steep learning, capability and readiness for higher-order jobs. To be a consistently dependable resource, one must consistently deliver promises made by adequate hard work, patience, perseverance and rigour. Each of these is a personal workplace habit. In case of unexpected delays due to unforeseen events, proactively reverting before a follow-up is another desirable habit that managers value. The causal connection between workplace habits and career growth is evident and all-pervasive.

Adopting shortcuts to fast-track one’s career may offer thrills and temptations similar to rash and reckless driving on a busy highway, but it turns out to be a risky proposition after a while. To build a sustainable and “all-weather career model”, executives need to understand the drivers of career growth, form underlying habits and nurture them towards (near) perfection. 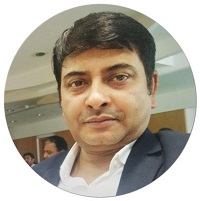 SHARE
Dr Jayant Kumar is currently Head HR of APSEZ (Adani Ports and SEZ Ltd) and its other entities. Prior to joining APSEZ, he was the CHRO at Tata Power Co. Ltd. He has also worked with Hindalco Industries, NTPC, TPDDL, RCOM, Tata Teleservices and Marico Ltd. An alumnus of XISS, Jayant holds a PhD in the area of Talent Management.