Women and Networking: "The Dramas of Power"

Networking may appear gender-neutral, but informal socialising becomes a barrier for many women in organisations.

"Men just network. Time is no limit. Drinks till 10 pm? Not a problem," says Satya, an ambitious senior executive in an MNC bank in India. "Their path keeps on progressing. I sometimes rue that as women, with our many responsibilities and the multiple hats we wear, we have restricted our boundaries."

Informal networking is the way executives form mutual ties and groups bond. In Men and Women of the Corporation, Rosabeth Kanter (1977) calls it the "shadow structure in which dramas of power" are played out. Networking may appear gender-neutral, but informal socialising becomes a barrier for many women in organisations. Often, long hours are required for this kind of socialising, which many women cannot afford as they have to return to a household and children.

What is stopping women from socialising after work?

"People who are able to work late at night are largely men. It's not about working effectively till 6 pm if you can work till 9 pm. Women continue to face it; hence you are not promoted, you are not given growth or given a plum role," complains Vani, a senior executive.

Men sometimes expressly exclude women from their bonding groups, both inside and outside the organisation. When women sit in meetings in a closed room, there are times when they feel that they are not part of the inside network of men. In male-oriented industries, many women often feel men don't allow them to be part of their inside groups.

Women may have networks at the middle management level, but they may feel the lack of strong female leaders at top levels and their mentoring.

If networking is a powerful communication channel in organisations, then women are being left out of it, which can potentially harm their career growth. One of the answers to this is having women-only networks. Women-specific clubs, groups and co-working spaces are the latest buzzwords in networking for those who need to and want to network but within their time and circumstantial constraints.

Comfort, inclusion and safety – these are what women report they find in all-women groups. Where available, these are utilised fully, and women also feel the change that comes as a part of it. Discussions happen in these networks, and women leverage that information for their promotion, in their job search or to build powerful friends who are also women.

Here is a collation of strategies that women have used or use in order to network successfully:

• They stood up against bullying

Anita, a talent head at a logistics company, felt subtly bullied by her male peers. It took her two and a half years to come out of her shell and stand up to bullying. She started attending seminars to begin building a profile outside her workplace as well. "It is more important to stand up against bullying," she says. "If nothing else works, contact HR."

• They asked for it

Let us turn this phrase on its head. Mita, now head of HR at an IT firm, talks about the time when she was expecting a promotion but it did not materialise. When she asked why, the answer was, "You never asked!" She advises not to sit and think that you would get noticed for your good work. One has to act, reach out and ask for what is due.

• They had confidence, optimism and great body language

Confident women don't wait for social 'cues' to speak up or approach others. They are unafraid to approach a wide variety of people from other industries, geographies or functions. They see backlash as "something that is going to happen anyway, so why bother." Their body language makes them seem powerful.

They did their homework, brought data and evidence to the table when they spoke. They went in well prepared for meetings. This added to their credibility as valuable assets to their companies. A noticeable factor in all the successful networkers: They were immensely comfortable talking with the top leaders of their organisations.

• They invested in self-development

• They used their strengths

Women have been seen to promote a positive environment for other women to contribute. In leadership roles, women have been seen to adopt a more democratic, transformative and participative style than men. Women are perceived to listen more, build relationships, be more empathetic and have more emotional intelligence than their counterparts. These may sound stereotypical but have nevertheless been proven repeatedly. These elements, when used as part of the way women communicate during networking, is highly effective.

Networking is a habit to practice daily. Being a part of women's networks, but, at the same time, spreading one's net far and wide, give women the depth and the span to reach out. Building relationships with authority figures, especially women bosses, who understand their unique problems, enables women to get mentors who are both powerful and supportive. Finally, workplaces are more woman-friendly now than ever before, so women have a wide berth to build their own rules. They can be great at building and forming relationships with peers and juniors in such ways that they become highly in demand in their circles.

Views expressed in the article are the author's own. The writer's opinion do not necessarily reflect those of Human Capital. 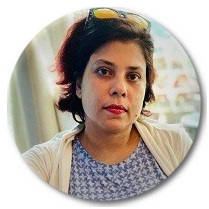 SHARE
Payal Mukherjee is a doctoral student at TISS, Mumbai with 15+ years’ experience in executive search, corporate communications and advertising. She writes articles on HR and is a published author. Her area of professional expertise is recruitment. Her areas of academic interest are diversity, inclusion, women’s voice and career transformations.