The Slow Killer Of A Great Organisational Culture

Have you ever gone to a scheduled meeting with your manager and struggled to get their attention because they pretended to hear you while constantly checking their phone or responding to emails? You feel miserable every time they do it, but it’s difficult to confront them. I’ve been in such situations and swallowed my feelings during the early years of my career.

Something else that I keep experiencing while working across time zones and cultures is people complimenting me for my English language skills. They are surprised by my vocabulary and clarity of speech, and they keep saying that I don’t have an accent despite being Indian. Initially, this sounded positive; only now, I realise that these were microaggressions.

Microaggressions: What Does That Even Mean?

Microaggressions are hardly noticeable, minor expressions of a deep-seated and mostly unintentional bias against someone, based on something core to that person’s identity – race, ethnicity, gender, age, religion, disability, sexual orientation, appearance, or nationality. They are deeply rooted in the subconscious, and the offender may not even be aware of the bias.

Microaggressions are experienced in various forms – choice of words, tone of voice, body language, facial expressions, etc. They accumulate over time, and as the Indian saying goes, “Every drop makes an ocean.” Because they are typically directed at marginalised groups or individuals who already feel disrespected, ignored and powerless, the cumulative effect can significantly impact employees’ sense of belonging. Microaggressions and gaslighting are the silent killers of inclusive work environments. People suffer in silence, and those who cause the suffering have no idea that they were disrespectful !

In the past five years, many MNCs have taken the lead to sensitise their employees, especially senior leadership teams and people managers, on unconscious bias. However, few companies see awareness sessions on microaggressions as a necessity. Many organisations only realise the dire need for specific interventions when employees leave the organisation, go public with discrimination lawsuits, or their brand reputation is affected on social media. I have observed that companies headquartered in the USA and UK are way ahead in their journey to create inclusive workplaces compared to their offices in India, Singapore, or the Middle East.

The three main types of microaggressions as defined by Dr. Jummy Okoyo are:

1. Micro Assault: The offender behaves in an intentionally provocative or prejudiced way towards a marginalised community or individual. For example: Stereotyping people based on their religion or caste, referring to an LGBT+ person as an embarrassment or cracking racist jokes.

2. Micro Insult: A subtle discriminatory behaviour or comment, often in the form of a compliment that makes someone uncomfortable. For example: Calling a person with a disability or an openly out LGBT+ individual brave or inspiring.

3. Micro Invalidation: This is an act of invalidating or demeaning the ideas or experiences of a marginalised group or individual. For example: Regularly ignoring a woman’s ideas in team meetings or discounting the analytical or tech abilities of female and minority colleagues.

Do You Inadvertently Use Microaggressions?

As stated earlier, microaggressions are a form of unconscious bias. They are indirect, subtle, and often unintentional everyday verbal, behavioural and environmental slurs that communicate discrimination, hostility, or negative/ offensive attitudes toward marginalised groups. Some may find it surprising that microaggressions sound positive when disguised as compliments.

Here are a few examples of microaggressions in the workplace:

• Telling a person that they are intelligent despite their race/ ethnicity

• Complimenting someone by telling them that they look great today, then following up with a statement about how it must be for an interview, appraisal meeting, client presentation, etc.

• Cutting off people or interrupting them constantly while they are speaking

• Constantly looking at your phone, watch or browsing through your emails during a discussion

• Forgetting to introduce someone in a meeting or asking for input from everyone except a particular person, thus leaving them out

• Cutting down someone’s ideas, rolling your eyes at their input, and changing your body language or voice tone in a way that communicates disinterest or a lack of faith in their ideas

Here are a few ways to reduce microaggressions in the workplace:

• Sensitisation: Awareness is key to reducing and preventing any form of microaggression. Create awareness among your employees.

• Training Sessions: Similar to annual integrity and IT compliance training, mandatory microaggression sessions will ensure that the entire workforce is educated on acceptable language and behaviours in the workplace. Work with an expert/consultant to facilitate such trainings. It will help drive difficult conversations in a safe environment, further leading to realisations and “aha” moments.

• Confrontation: It is important not to let microaggressive comments pass by, and the best way to address them is to confront the perpetrators. Ask them why they said what they said, what made them say it, explain what they meant, where the comment came from, etc.

• Leveraging Humour: For those who can’t confront directly, using humour to diffuse the situation works, too. For example, if someone speaks over you, say, “Hey, I know you are as excited as I am to share your view, but I am not done sharing mine. Could you hold on to that thought for a few more seconds?”

• Inclusive Culture: Work on creating a psychologically safe environment. Provide your managers with tools and techniques to involve everyone on their teams and hear every voice and opinion.

• Grievance Redressal: Implement robust systems that allow employees to report discriminatory encounters anonymously through a hotline or by email.

• Taking Action: To prevent a toxic environment, make it a priority to address accusations. This helps send a message that the organisation cares about its employees’ mental well-being and won’t tolerate any discriminatory or derogatory behaviour.

• Increasing the Diversity of Your Network:  I cannot stress this enough – get out of your comfort zone! Focus on meeting new people and making friends with people who are not like you. 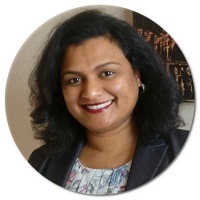 SHARE
Monika Navandar has 17+ years of multi-industry HR experience and has led many leadership roles in India, USA, Italy, Singapore, Dubai and South Africa, supporting global C-suite leaders. She is the Founder of NeoSeven Solutions and has formerly worked with Johnson & Johnson, Volkswagen, Merck Pharma, HSBC and IBM. She has been on the Harvard Business Review Advisory Council for 4+ years. Monika is also an eminent speaker and is currently based in Dubai.