Business is a marathon. Sometimes, it is easy to deliver spectacular results over a short span, but the true test of business excellence lies in delivering strong results over a wider time span.

There has been a great deal of talk over the relevance of an organisation’s culture on talent attraction, development, and retention. It has been widely accepted that

Organisations with a nurturing culture attract the best talent and have a higher chance of retaining this talent. In today’s highly connected and digitised world, organisations are working in a more transparent manner – much akin to the metaphorical glasshouse.

This is notwithstanding the fact that portals such as Glassdoor render a glimpse about an organisation’s culture for prospective employees. There is also strong evidence that some cultures are conducive to a high retention rate.

In my career spanning more than 25 years, I have always tried to foster a culture focused on the core values of Trust, Appreciation, Conceptual clarity, Transparency and Selfdiscipline and have witnessed strong business results that have been above the industry average. This prompted me to question –

♦ What happens to the long-term performance trajectory of companies with a strong bias towards result orientation at the expense of process and people orientation?

♦ Do we see any remarkable differences, and can we derive some inferences from these?

Let us look at two examples from a non-business environment.

In 2018, South Africa and Australia - the two top cricket teams in the world – were fighting for supremacy in an intense four-Test series. At the start of the third Test, the series was tied 1-1. The team that would win the third Test would most likely win the series. In such a background, Bancroft, an Australian player, was found to have broken the rules of the game and tampered with the ball to assist the seamers. All hell broke loose – Steve Smith and David Warner, the Australian Captain and Vice-Captain respectively, were sacked, and the manager Darren Lehmann replaced. The fracas reached to an extent wherein the Prime Minister of Australia was forced to make a statement. The debacle was laid at the doorstep of the ‘Win at all costs’ culture of Team Australia. Australia lost the third Test and was demolished in its next outing in Johannesburg. The Australian one-day international team suffered a whitewash a couple of months later. Further, in October, the T-20 team was whitewashed by Pakistan. The team lost many more series at home in the subsequent summer.

In 2011, India was playing against England on the latter’s home ground. And right before lunch, Ian Bell was mistakenly declared run-out, much to the displeasure of the audience. When the two teams returned after lunch, there were boos for M.S.Dhoni, the Indian Captain. This soon turned into cheers as people saw Ian returning to the pitch. Dhoni had reversed his decision to appeal after he realised that it was a mistake. He was given a standing ovation for the same by the audience. Though India lost the match, they managed to win hearts. Under Dhoni, India went on to become the most admired team in the world, and Dhoni himself was looked upon as a charismatic leader whom people wanted to emulate.

If we accept that the success of a Cricket team (or any sports team) is reflected in its ranking as well as sponsorships and popularity (both are closely linked – sponsorships follow popularity), then there is little doubt as to which of the above two teams emerged as more successful in the long run. The Indian cricket team has been consistently ranked amongst the top teams and so is the Australian team. The difference, especially after the ball-tampering episode, lay in the sponsorship and popularity of the team. The Australian Cricket team was reviled as cheats and lost millions of dollars in sponsorships. They were booed at many of their matches. Neither the corporates nor the fans wanted to be associated with a team that cheated to win – the episode was christened ‘Sandpaper-gate’ in an obvious reference to the Watergate scandal from the Nixon era. In contrast, the Indian team was extremely successful in bagging big sponsorships and was cheered in almost all the grounds in the world. Clearly, there was only one winner in this contest and the power behind this performance was – Culture.

Let us dig into this a bit more. The Australian culture has always prided itself on its tough as nails, never give an inch and never say die attitude. The Australian cricket epitomised this culture. Over the years, people probably did not realise the point at which this culture slipped into a mindset of ‘Win at all costs’. This unfortunate transition placed a lot of emphasis on winning that the ‘how we win’ or the process of winning became a sad casualty. The entire focus was on winning and little or no attention was given to softer aspects like sportsmanship and humility in winning. We can find examples galore in annals of corporate history that symbolise this – Volkswagen, Enron, Luckin Coffee, Satyam, the list goes on. All these are examples of corporate fraud that occurred due to a culture which did not respect the ‘right way of winning’ and had poor core values.

Behaving when no one’s looking

Culture is defined in many ways, but the definition that one likes is, ‘How people behave when no one’s looking’. This definition captures the true essence of the values that employees have internalised and hence exhibit these in their default behaviour. First and foremost, the Organisational leadership must identify the cultural cornerstones which they want their employees to internalise or the sotermed “Culture Vision” of the company. They should then proceed to embody these values in every decision and transaction. People recognise what is expected from them based on the cues they pick up from how their leaders behave rather than what they say. Culture value statements mean nothing when they are not backed by leadership behaviours that mirror these values. The other important point to keep in mind is that sometimes culture changes inadvertently. This slow change is almost insidious in nature. It is important to capture this drift right at the onset otherwise the drift can become so significant that it needs a major and sometimes painful course correction – a la Broken window syndrome.

Business is a marathon and not a sprint. It is sometimes easy to deliver spectacular results over a short span of time, but the true test of business excellence lies in delivering strong results over a wider time span. The difference between Good companies and Great companies is that good companies deliver good results many times, while great companies deliver great results almost all the time over several decades. While the external world sees the end results, the leadership of a great company is as much, if not more, concerned about how the results were delivered as the results themselves. They would be, I am sure, keeping a close watch on the course of the harbinger of sustained above-par results – Culture. 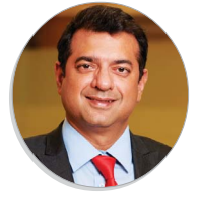 SHARE
Ashish Pradhan is President, Siegwerk India & Greater China. He comes with over 25 years of experience in the Packaging industry and has worked in Huhtamaki, Positive packaging, Henkel and International Paper. Ashish is a Mechanical Engineer with a Management Degree and holds a Diploma in International Trade, from the Indian Institute of Materials Management and a Diploma in Packaging from the Institute of Packaging, UK