Square Pegs In Round Holes

When organisational values are aligned, employee behaviour will embody the core values. However, more often than not, values end up as empty catch phrases coined by copywriters.

Organisations define values as the beacon for interactions with each other and with customers. When values are aligned, employee behaviour will embody the core values. However, more often than not, values end up as empty catch phrases coined by copywriters. Such statements lead to increased levels of cynicism in the workplace and undermine the credibility of the top management.

When organisational culture and strategy fall out of alignment, leaders may be forced to deal with farreaching consequences. Value statements are a reflection of an organisational belief system that warrants employee buy-in and that it is upheld by them. All too often, employees get to deal with a conflict of organisation values with their selfvalues, or they sense that the organisation has made lofty declarations that are either ambiguous in interpretation or not upheld in spirit. There is a propensity on the part of the leadership to use phrases such as "Integrity", "Give, Gain, Serve", and "Be Humble" to define the core values. Such phrases are good to hear and make for good storytelling, but end up meaningless when not reflected in action.

Organisations need to realise that employees do not rally around a set of hollow values when such ideas are not practiced and upheld by the leaders in their organisation.

When values are misaligned, it leads to considerable fallouts, which are manifested in the following ways:

◆ A lost sense of Purpose: When strategy and a strong culture are aligned, they bring in a sense of clarity and direction to employee actions and decision making. When the alignment is lost, employees default to self-serving behaviours or tend to drift away.

◆ Disorientation: Mixed signals from the leaders could lead to emergence of issues that are brimming under the surface. For instance, a company that we worked with talked about "Being Humble" as a guiding value, when the leaders themselves had over-the-top behaviours, looked down on people with poor language skills, and refused to hire people unless they "look presentable." When leaders espouse one set of values, but reward a different set of behaviours, it can leave employees confused and out of touch with the organisation's goals. A classic mistake most companies make is that they talk about "Teamwork", but reward the individual contributor who is typically a poor team player.

◆ Credibility: A company's brand image is a reflection of its Culture and Strategy. Organisations that talk about "Diversity and Inclusion" but insist on serving only vegetarian food, or consciously avoid recruiting people of a particular religion send signals that reek of hypocrisy to stakeholders.

◆ Impact on attrition:  When companies extol some values but practice contrary behaviours, employees lose a sense of identity with the organisation and its mission, and that leads to them seeking more engaging assignments outside. This creates increased attrition challenges for the organisation.

When organisational values need to be defined, the following questions need to be considered:

◆  Do organisation and employee goals align with the values and vision?

◆ Are there frequent discussions about the 'why'?

◆ How and by whom is the organisation culture defined?

◆ How do external stakeholders perceive the culture? Is there any disconnect between internal perception and external perspective?

◆ Are individuals in the organisation empowered to design work in alignment with the values?

◆ Is there accountability and consequence for non-alignment?

“Values help us in clarifying what everyone should do or not do in any business situation. It saves enormous time and effort because each issue does not have to be individually debated at length. Values transmit trust. Trust is not only at the heart of leadership, but forms the essence of all relationships. Trust is the only currency that can sustain a corporation through the turbulences over its lifecycle.” - By Azim Premji

While it is tempting to author "feel good" values, it is sometimes the basic, day-to-day actions of the individuals in the company that enshrine values that are truly at the core of operations. It is not success but failure that defines what an organisation is. A good and robust mechanism for outlining organisational values is to recount instances of three of the most difficult situations that the organisation has faced, and its response to those situations. Most times, leaders and teams rally around certain core tenets which are at the heart of the operation.

One of the organisations that had mandated a Vision and Values organisation kept emphasising Integrity as a desirable value. However, when discussions emerged, it was apparent that the industry in which it operated had a long history of paybacks and cross entries which, at the heart of it, were at conflict with the very principle of Integrity. After much debate, it was decided that the phrase would be dropped from the value list.

Likewise, the management in another organisation was all set on "Risk Taking" as a core value, while the general business setup emphasised adherence to set processes with no deviations. In a value clarification exercise, it became clear that Risk Taking was a desirable attribute because the organisation sensed the need for change, while a majority of its systems and processes penalised risk takers or innovators. Concerted discussions led the organisation to shift its perspective and state its value as "Stick to the Knitting." 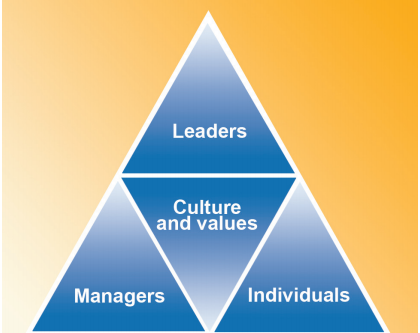 Examine the Intuitive: While organisations are increasingly moving towards big data and analytics for everything, things such as values are best approached from a more intuitive perspective. While quantitative data adds a lot of value to decision making, it is usually the sentimental or "human side" of a decision-making process that functions as a differentiator.

It is important to take a step back and re-examine the organisation's purpose and core values every now and then, and re-chart the mission at regular intervals. While doing so, it is important to consider these aspects:

Stock-taking of your employees: What are the organisation's hiring and promotion practices? Are there unconscious biases in operation? HR policies often have the "right" phrases, but many practices are out of alignment with these phrases. For instance, companies talk about "Care and Compassion", but when employees resign, they are meted out unfair treatment.

Systems and Processes: The processes in an organisation often speak of values way louder than the value statements themselves. For instance, an organisation that espouses "Flexibility" but demands total centralisation and paperwork for anything and everything that needs to be done. Or "Trust" as a primary value when every employee is asked to explain why they availed leave on a Monday or a Friday? Or even worse, an expense reimbursement system that does not permit most of the senior executives to approve expenditures.

What words are the leaders using to communicate? Are these communication choices supporting a culture that reinforces the values? Leaders often speak about things that are top-ofmind, and if the values are deeply enshrined, then the communication is in line with the values.

Wipro's corporate journey is a lesson in sound corporate citizenship, values, and ethics, and paying forward to society. The legacy built by Azim Premji is a glowing inspirational beacon for entrepreneurs, corporate employees, leaders, and everyone else. His emphasis has been more on seemingly simple and old-world principles. His own life embodied hard work and displayed perseverance as a discipline.

In one of his famous speeches, Mr. Premji has highlighted the importance of being an ethical organisation and having people who behave with unimpeachable integrity. He believed that such people take decisions with long term interests, and that is hugely beneficial in dealing with and adapting to change. He elaborated on his belief of the importance of values in adding value to business. As the mantle of leadership is passed over from father to son, we see a hopeful future and for Wipro to teach corporate India what Value Alignment is all about.