Bringing Out the Enabler

When you come across a trainer you may find him/ her introducing himself/ herself as a Facilitator since he/she believes that it is one and the same. This may probably be so because the word trainer has been in use for some time now, and, is therefore being seen as a cliché, and in order to make the same sound with gravitas, the training community often uses the word 'Facilitator'. But, what they do not realise is that both these terms are worlds apart. Along the same lines, many use the words trainer and facilitator interchangeably; and also use speaker and presenter in the same breath. In other words, all these four terms mean one and the same to them. Surprisingly, a few in the HR domain (especially the young HR turks) use these terms interchangeably as well. For example, I was once asked by a young HR Manager to 'facilitate' a session for a group of 400 delegates in 60 minutes. I was flummoxed and began to ask her for the outcomes and realised that what she wanted me to deliver was motivational talk, and not conduct a facilitation session. My talk was followed by wonderful feedback, and in spite of me correcting her on numerous occasions, she chose to refer to me as the Facilitator of the session.

The difference between facilitation and the other methodologies

Let us explore a simple framework which is in fact utilised by the Singapore Facilitators Network to clarify the difference to understand this. 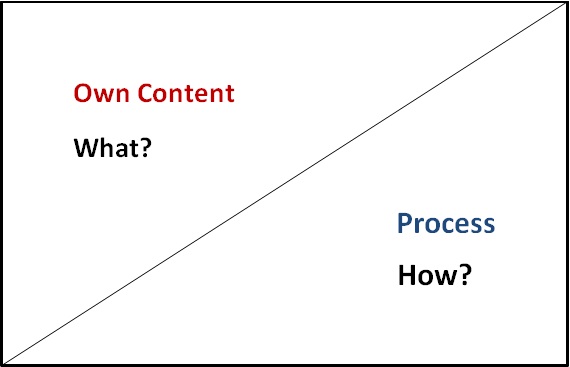 It is all about how much of your own content you bring about to the group versus how much content you can solicit from the group by using an appropriate process.

So, if you bring in your own content and the audience is primarily only listening, then it surely falls into the category of speaking. We all know the power of speaking, and yes, it has its own charm and impact if done well. Look at the politicians and the spiritual speakers - they are truly influential in their public meetings and discourses respectively.

Presenting initially made its foray in organisational board rooms - the presenters bring in their own content; however, they create room for a bit of leeway for the audience's opinion to emerge by way of seeking inputs on the topic, clarifying questions and doubts raised by the group etc. It is likely for some presenters to actually deliver a monologue, and this makes them no different from being termed as speakers.

A trainer is usually engaged to train on pre-decided topics as per the agreed objectives between the L&D (Learning & Development) team and the trainer. They design the modules of the workshop/programme in such a manner that there is a transfer of learning, and the learner gains knowledge, skill, and/or attitude to start applying the learnings back in the workplace. It is normally a practice in organisational Training (T) to ensure that it is a day's affair, and can be exhaustive for the learners, since there is simply too much information that gets disseminated. There are also instances of amateur trainers making the session tedious primarily through one-way communication in the form of numerous slides. An awareness that even training can be a drab has made the L&D folks seeking out more engaging trainers or what we call as Facilitative Trainers (FT). As a Facilitative Trainer, one needs to understand the learner profile and make the training lively by utilising engaging methodologies such as icebreakers, energizers, activities, games, exercises, discussions, roleplays etc. If one can make a transition to this zone, every training session gets converted to learning in a fun and engaging manner.

The difference from facilitation

At a basic understanding level, the term Facilitator is derived partially from the Old French "faculte" via Latin "facultas", or parallel form of "facilitas". Both were derived from Latin "facilis" or easy, an adjective formed from the verb "facere", or to do.

Kaner defines the term facilitator as follows, "A facilitator is an individual who enables groups and organisations to work more effectively; to collaborate and achieve synergy. She or he is a "content-neutral" party who by not taking sides or expressing or advocating a point of view during the meeting, can advocate for fair, open, and inclusive procedures to accomplish the group's work. A facilitator can also be learning or a dialogue guide to assist a group in thinking deeply about its assumptions, beliefs, and values and about its systemic processes and context".

Gary Rush, IAF CPF, defines Facilitator as follows, "A Facilitator is a content-neutral task leader who forms a group of people into a collaborative team supporting consensus and uses a range of processes to enable the group to accomplish their task. The Facilitator is responsible for the context." (G Rush: 2013). While some may assume this to be easy, it is in fact not so simple. Usually as a Speaker, Presenter, Trainer we are used to being on a pedestal position (a position that comes from our belief that we have more knowledge as compared to the group), and many a times, as a SME (Subject Matter Expert) we love to give "gyan" to the group. Silencing this guru in us is a herculean task and if one comes from a hierarchical position or culture, then it is a long and arduous journey in itself. It requires one to silence the commentary in us and be mindfully listening to the said's and the unsaid's of the group members!

The closing question therefore is: What are you really? A Speaker, a Presenter, a Trainer, a Facilitative Trainer or a Facilitator? And then, do you want to be only working on one of the methodologies? Or can you adapt to each one of the above, based on the client, group, need or situation?  If yes, then go ahead and even call yourself the Enabler—one who enables learning the way the Learner chooses to!

SHARE
Ajit K. Kamath is the Principal Enabler at WizTalks Management Consultants. He is one of the Founders of the India Chapter of International Association of Facilitators (IAF-India) and has been the Regional Director of Asia Region. He can be contacted on [email protected] or [email protected]