Women continue to face a multitude of challenges that act as an impediment to their success. Addressing these issues is fundamental to creating an equitable and inclusive workplace.

In the last couple of decades, there has been a significant conversation about gender diversity. Many conferences, organisations and publications have been organised on this subject. When a head of state like Sanna Marin, Finland, was appointed, we celebrated the possibility of a woman leader breaking the glass ceiling. To reduce the gap and ensure that women get equal opportunities, the 2013 Companies Act (Section 149) and SEBI regulations made it mandatory for certain companies to appoint at least one woman director. On the one hand, I celebrate that women are being encouraged to work at the leadership level; on the other hand, it’s abysmal that a law had to be instituted to make that possible.

How can we make it a norm for women to be empowered and climb the top echelons of corporations? As a woman professional, I have experienced and observed a multitude of reasons that act as an impediment to the success of women.

◆ First and foremost, culture and social pressures result in young girls being treated less than boys from birth. This attitude creates a series of beliefs that limit their ability to lean into situations. There are some stereotypical expectations, such as a woman has to manage the home and children alone, adding pressure on her to be a superwoman. As a mentor for women empowerment on a social platform, I have come across hundreds of women who have taken a sabbatical from work due to marriage or children or other family commitments. A common concern is how to get back into the job market because either they have lost their confidence, or they don’t know what alternate profession to pursue that will help them balance their life, or they lack family support.

◆ The cultural issues lead to fewer women joining the ranks in organisations, management institutes, engineering colleges, and several other professions. I was speaking to a client in the insurance industry, and their organisation has just 10% of women employees. In a male-dominated organisation, women feel overwhelmed to have their voices heard and needs addressed. Fewer women apply for hard-core technical jobs, and many fall off the block after mid-management due to lack of support or systemic issues. In my own experience, although organisations treated me equally at a professional level, there was a lack of awareness and policies on the needs of women, such as daycare for children, flexible hours, safe travel after hours, etc. This made it challenging to manage transitions with ease.

◆ Additionally, women often feel that they need to work harder and prove themselves more as against their male counterparts. Indra Nooyi, former CEO of PepsiCo, said in an interview, “…especially as a woman CEO, you are the focus of everybody, and they’re looking to see what you do wrong so they can really bring you down.” Therefore, women require more strength and courage to make it to the top.

I remember that when I was looking for ways to have it all and balance it all, a senior leader at an organisation suggested that I should stay at home since I did not have economic reasons for working. He also told me, in a very blasé way, that I would need to work harder to prove myself.

This archaic and discriminatory attitude is prevalent in several large organisations, which prevents women from assimilating into an organisation.

◆ I have also noticed that women find it relatively challenging to brand themselves or do business development. This behaviour emerges from a series of beliefs and societal conditioning. Recently, I was speaking at a Technical University where, even after 50-plus years since inception, the enrollment of women is in single-digit percentage points. Interestingly, a common suggestion that emerged was that not only do men need to be empowered, but they also need to be the champions for inclusion of women in different verticals of society. Only empowering women is not going to resolve this issue. It’s a much deeper cultural issue and, hence, needs to be addressed with all stakeholders.

◆ I have conducted workshops at organisations to address beliefs that obstruct women from communicating openly or asking for support from their male bosses. I remember I was coaching a senior executive while his team member had taken maternity leave. He kept his team member completely out of the loop while she was on leave because he felt if she were his wife, he would not like to disturb her. On the other hand, she was feeling isolated and concerned about how to transition back into her job after maternity leave. In the executive’s endeavour to be sensitive, he forgot that his team member was also a professional, not only a woman. That subconscious lens itself sometimes blocks the interaction at an equals’ level.

Women are close to 50% of the world population. Women’s empowerment is critical to the furtherance of any society. It is heartening to note that global institutions like the IMF and the UN are led by women. The heads of state of some countries are women. India has been progressive to have women as their Prime Minister and President. On a note of hope, the outbreak of coronavirus may open opportunities for women to work from home. Organisations have been forced to undergo digital transformation at a much faster pace. Also, this period is helping organisations adapt to the concept of work from home, and they are designing processes and policies to make this effective. It’s a significant cultural shift that is occurring at a systemic level and possibly expanding the minds of many to newer possibilities and ways of working to be more inclusive, agile and productive. 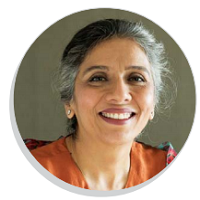 SHARE
Ashu Khanna – Founder & CEO, Arka Leadership “Our relationship with our inner voice is the key to living life joyously” Ashu, Founder & CEO Arka Leadership, has successfully partnered with many CXO's over the past 14 years to develop authentic leaders. Her highly perceptive, warm and direct style combined real life anecdotes, helps clients to unleash potential and design a life of success and happiness. Ashu’s clients include several Indian and multinational companies. She is a Speaker at Leadership, HR and Coaching conferences. Ashu has published 3 books sharing insights from her journey of transformation and is currently working on her 4th book. She also serves at various NGO’s. She has been the Founder President of the Mumbai Chapter of International Coach Federation (“ICF”) and actively contributed at ICF India, Regional and Global committees. Ashu is a Chartered Accountant and has worked in India and South East Asia. For further details visit: www.ashukhanna.com