Dumbing Down To Rise And Shine

Being unintelligent or just plain stupid may not be all that bad for innovative ideas to come through.

The movie Forrest Gump was a reservoir of earthy wisdom. Life is like a box of chocolates since you never know what you are going to get, or, stupid is, as stupid does. The supposedly stupid man or woman has been the laughing stock of history. The clownish Big Moose of Archie’s Comics fame could barely comprehend the world around him. And his stock retort, for things good or otherwise, was a standard, ‘Duh’.

Life is known to be a cruel master with no quarters given to lesser mortals accused of being stupid. But stupidity has its uses. Don Quixote was Quixotic, to say the least. He could fight imaginary windmills and stick his neck out for damsels in distress. He could do things that most of us cannot even conceive in our minds, far less act out in life. Yet, his was a legendary albeit offbeat approach to doing things, real or imagined.

Today, differentiation is key to business success, and innovation has become the life blood of business, but it is not easy to come by. As the Apple tag line goads - how do we think different? Einstein had famously said, the definition of insanity is to expect different outcomes, while we did the same things again and again. But in order to do different things, we need to be off the beaten track, be off guard, inhabit a fail-safe environment, and be encouraged to take chances. Once we veer away from the conventional track, we may ask questions which may appear to be positively juvenile, if not infantile. It may even seem messy and stupid.

However, one need not worry, since there will be more than enough opportunity down the line to clarify and filter and sort through your mess in order to bring a meaningful creative product to life. But in the beginning, generating fragments is the name of the game: half-ideas, quarter ideas—perhaps they should not even be thought of in terms of ideas, for “idea” implies too much completeness and commitment, and it is just too early for that.

Now is the time to just let all that weird meaningless stuff that is jostling around in your head to make its way into the world. The problem is allowing ourselves to be this undisciplined in our thinking is not easy. Despite our beliefs, it does not come to us naturally. Even if we did have a talent for unfocused activity as children, it certainly was schooled out of us early on. The lure of linear thinking hovers over us like a wraith, and we succumb to its charms.

“Our talent for unfocused activity as children was schooled out of us early on. The lure of linear thinking hovers over us like a wraith, and we succumb to its charms.”

In the age of instant answers, there is little time or interest in agenda-less exploration. Even creativity is hijacked by process discipline, and if you are suspected to be out of the box for too long, it may become difficult to get back into the box at all.

And we all love to be good conformists at the end. How uncomfortable would it be to linger in the mind’s no-man patch? However, as they say, practice makes perfect. It is something that can be learned.

“A temporary suspension of clever insight does no harm. Instead, it is important to take a break from knowing and suspend belief to discover ideas anew.”

It is this delicate to and fro, flirting with possibilities that should be the bedrock of genuinely innovative solutions. In this blurry zone, one needs to be wary of GIGO (Garbage in, garbage out). Lateral thinking has a charm and utility of its own, the untried and untested should not be allowed to shrink into unusable ideas and practices, less politely put, garbage.

Brainstorming your way to Innovation

◆ We keep it to be a no holds barred session

◆ We Let the wildest idea win

◆ We allow quantity to matter and not quality

And no one is allowed to be judgemental about the ideas that come across. What next? Should we then revert to our default mindset, the annoying and judgmental smart guy inside our heads to get the better of us. Go for a walk. Take in a movie. It is time to dumb down. And that is what is required. Start to enjoy all the random stuff that spews out onto the page before us, some of it may even be completely idiotic. But let us hold judgment at bay.

Then, without even realising it at first, things begin to take shape. A direction starts appearing. The somewhat messy outpouring starts appearing to be not so messy after all, perhaps may even seem cogent in bits and pieces. Allow the annoying smart guy to return.

inside our heads and help out. And after a while—sometimes a short while, sometimes a long while— stand back and look at it. It works. It holds together. Sure, it may not be the only right answer, but it is an answer, and it feels right.

And before a method appears in the madness, one way to have good ideas, as Linus Pauling said, “is to have lots of good ideas. Some may appear idiotic at first glance, but let that be.”

Moreover, there is one thing that becomes clear. Perhaps we would not have crossed this milestone if we had not given ourselves the license, for a while at least, to act like a fool. Once again, being stupid is a smart move to make. 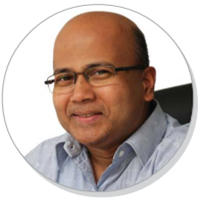 SHARE
Dipankar Das is the author of Cracking the CSAT Code at the Call Centre. He has worked in diverse organisations, including Genpact, IBM and Tata Projects. He is currently Vice President and Global Head of Skill Development at iSON Experiences.