Generational Cohorts in the Indian Context

Part of running a business efficiently is to know the people that work for you, as disparate collectives and as individuals. More so in a time as one research after another keeps reiterating the importance of ‘human element’ in driving holistic growth in the era of machines and algorithms. Whether we like it or not the workplace exhibits diversity in a range of aspects, be it race, nationality, gender, class, caste or even disability.

However, an important dimension and the one that has endured is the idea of generations. In general parlance, one often talks about ‘our generation’, ‘older generation’, ‘the coming generation’ and perhaps something one refers to on a daily basis is ‘the generational gap’. The notion has been in common currency for so long that the usage is deliberate and acceptable. As organizations hire for varied competencies people belonging to different age groups, there is an undercurrent of realization around differences in work ethics, communications styles, beliefs and values. Hence, there is a pressing need to foster a body of knowledge that can help organizations deal with the contingencies that arise from people belonging to different age groups working alongside.

The utility of ‘generation’ as a sociological construct and its relevance to businesses has a long history. But one of the first scholars to have seminally contributed to the concept was the German sociologist Karl Mannheim. Mannheim in his 1923 essay ‘The Problem of Generations’ laid the basis for what was to broadly become ‘the generational cohort theory’.

The main premise being that individuals belonging to a specific generation, born within a particular time period exhibit a relative consistency in their beliefs, values, interactions, aspirations and habits because their formative years are coloured by similar socio-economic, cultural, political, and technological influences. However, as Mannheim suggested, the likelihood of people within a generation developing a ‘distinctive consciousness’ is affected by both, the extent of their participation in and the response to major historical events that drive social change during that time. The ‘generational cohorts’ thus are fluid classifications and there is always an overlapping of characteristic attributes for generations successive or otherwise. 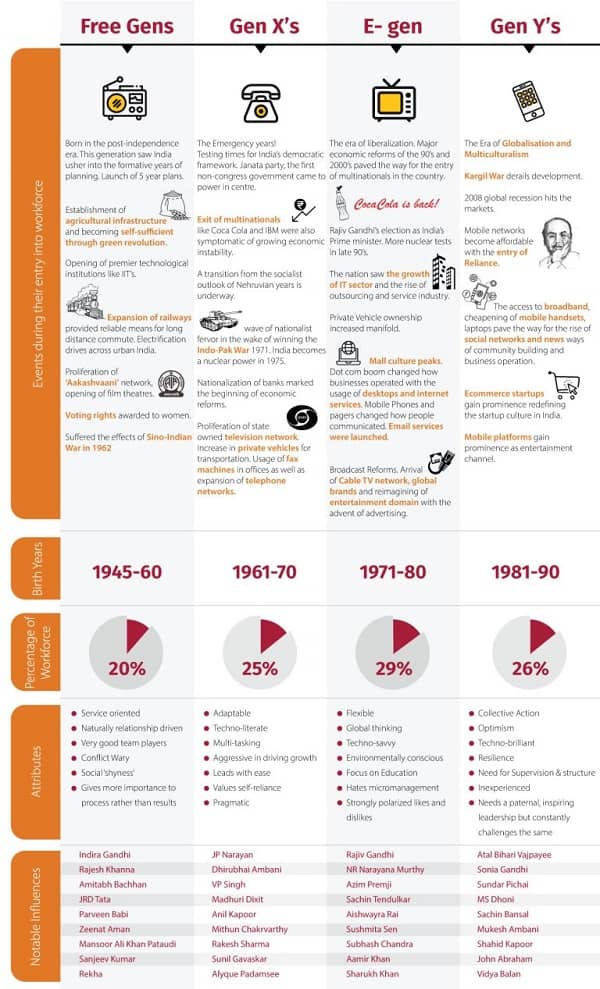 Over the years, western scholars have researched generational classifications of their workforce to identify behaviourism and preferences of employees to allow segmentation for efficient talent management. The segmentation helps not only to deal with ‘generational tensions’ that may arise due to intrinsic differences between employees of different ages working alongside but also help companies devise better solutions for the learning and development of various sections.

Scholars have identified four popular groups of generational cohorts for the workforce in United Nations: the traditional generation (born before 1945), the baby boomers (born between 1946 and 1964), the Gen X (born between 1968 and 1979) and Gen Ys (born between 1980 and 1999) (Tolbize, 2008). For good or bad, these groups have become part of the zeitgeist in such a way that nations outside the US have deliberately deployed them to categorize their own workforce.

However, it is good to recall that every country has a distinctive pace of socio-economic, political, cultural and technological change, its own set of definitive historical circumstances that affect its population. As research in non-western countries is catching up, generational classifications specific to their own social milieu have come up. So, we have the 386 generation in South Korea named after the Intel 386 series of processors to signify politically active, techno literate young adults who led the democratic reforms in post-war Korea. In Singapore, the term ‘Pioneer Generation’ was used to address people born before 1949 for having significantly contributed to country’s development during the initial years.

Likewise, in India while a derivative of classification popularly used in western countries works, an overview of the factors, prominent events that have actually shaped the behaviours of dominant workforce segments does help in contextualising their attitudes.

Studies confirm that the millennials or Generation Y will account for about 2/3rd of the entire workforce by 2020 making them the most dominant segment in India. A glance at the spate of advertisements targeting this segment show how millennials value autonomy in work as in life. As more and more millennials move into leadership roles, incorporating the observations pertaining to their value system can immensely help in designing learning tools – be it the simulations that drive behaviour change or modules that help improve hard skills.

Simple insights about their communication styles, their views about organizational hierarchies, even their preferences for aesthetics can contribute to a holistic conceptualization of learning ecosystems as well as building work cultures that are enabling and productive.

However, for people in the L&D there is a delicate balance to maintain between leveraging the knowledge about generational cohorts and generational stereotyping. Recent studies have also shown that although work styles change over time due to techno-social developments, work motivations largely remain the same for successive generations. While providing a nuanced perspective on talent management, the idea of ‘generational cohorts’ comes with its own set of disclaimers. But that perhaps is a discussion for a later time.

'This article has been reposted from the Enparadigm blog'