Serenading Virtue: The Tryst With Character

The positive effects of experience, pain, and trial and error cannot be overlooked or underestimated during the formation of moral leadership.

The positive effects of experience, pain, and trial and error cannot be overlooked or underestimated during the formation of moral leadership.  They strongly put the onus of character development on the individual, while emphasising “free will” and the human ability in discerning the right choice. Models of Leadership Development developed on the western theory focus on instilling a “sense of goodness” in leaders, or in the belief that if people “know” the “right thing to do”, they will act on it.

In their book, “Ten Virtues of Outstanding Leaders: Leadership and Character”, Al Gini and Ronald Green reinforce their claim that virtue is a matter of character and habit. They emphasise that the positive effects of experience, pain, and trial and error cannot be overlooked or underestimated in the formation of moral leadership. When this is contrasted with the Indian reality and the Hindu concept of tolerance, it is apparently visible in the day to day folklore and myths about Hindu Gods outlined in the words of the author below :

“Walking through a temple, you might form the impression that Hindus take their idols lightly. Here, a God is stealing the clothes of damsels frolicking in a lake; there, another God encourages his brother to cut off the nose and ears of an admirer. On many walls of great temples, minor Gods and Goddesses engage in sexual acts that would never be shown on television before the watershed. Hindu Gods are imperfect, and act in morally ambiguous ways, using trickery, treachery, and subterfuge. They also show nobility, courage, and valour.” (Tripathi, 2008)

The above quote very succinctly summarises the Hindu concept of humanity and the concept of imperfection in existence.

The basic premise of successive births, each eradicating or minimising prior “karma” is an integral part of the Indian construct, and therefore, it embraces the “darker” sides of the morally virtuous as part of their Karmic penance.

India has had a 3000-year old tradition of developing Leaders. It was part of the Guru Shishya (teacher- student) culture in which storytelling, sacrifice, and discipline were instilled in the offspring of the royalty, saints, and scholars to build character and enhance resilience.

Various Indian texts outline that the prototype of a good leader is found in the ideals of kshatra – being selfless, well learned in subjects like statecraft, governance, war science, justice, commitment to dharma, ability to endure and face hardships, an attitude of being dispassionate and impersonal when delivering justice and punishment. This is a view at the highest level, and the several qualities required of a leader or ruler are found across hundreds of primary texts, which can be classed as under:

• Ramayana, Mahabharata, Purana, ArthaSastra, and Smrti-s: These elaborately discuss Raja dharma, and the main qualities required in a King such as “prajaranjakatva” (managing citizens) and “siksha dakshata” (education and up fitment).

• Panchatantra, VikramadityaBetala and Bhoja-sala Bhanjika: These texts demonstrate through stories the subjects discussed above in a way that they enable even a layman to understand.

Story-telling and folklore were used to differentiate the concept of good and bad, and the acceptance of human frailties requires constant work on itself. (source: samvitkendra.org)

The Gita as a Leadership Development guide

It is believed that the Bhagavad Gita came into being around 200 BCE (a little over 5,000 years ago). The Gita is a dialogue between Sri Krishna and His dear friend Arjuna. Ever since the great commentator, Sri Sankara, fixed the total number of verses in The Gita as 700, this is being accepted as the most authentic number, and all the modern editions of the Gita contain 700 verses.

Few interesting aspects of The Bhagavad Gita and The Mahabharata

• 18 Parvas (sections) of the Mahabharata

• 18 days was the duration of the battle

• 18 chapters in the Bhagavad Gita carry a lesson for each day of the battle.

It is indeed astonishing that an epic of such proportion was narrated in the middle of strife and bloodshed, and “doing one’s duty” was shown as the true path of a Leader. The war in itself was built on an artifice of deceit, treachery, and violence. And through this, the Gita outlines a path to higher spiritual consciousness of a Leader.

The Gita postulates a simple three-fold structure of reality: the world (jagat), the individual self (jiva), and God (Parmatma), and that there is no other entity besides these. The Gita states that what we witness through our own eyes is the world. And all of us have a vivid experience of the world characterised by activities and objects. Similarly, everyone has a vivid experience of his or her being or existence or self. Devdutt Pattnaik, the famous Indian mythologist, has summarised the 18 chapters of the Gita in 18 tweets to distil its essence beautifully.

The Indian mythological text as well as the Bible make references of the powers of spiritual consciousness to improve character development, self-control, and higher awareness.

The Hindu concept of dharma, “doing one’s duty”, is the essence of spiritual leadership. Lord Krishna’s reference to dharma in The Gita reinforces his statement that Arjuna must perform his own dharma (duty), and not neglect it in the name of dharma. Arjuna can neither protect dharma nor keep himself on the spiritual platform if he abandons the duties that are inborn to him. Thus, the Lord says, “One’s own dharma, performed imperfectly, is better than another’s dharma well performed. Destruction in one’s own dharma is better, for to perform another’s dharma leads to danger.” (from the English version of The Bhagvad Gita).

The concept of a Character-Centric approach of Leadership and the Situationist approach of Leadership aptly exemplifies the differences between the western school of thought and the Indian belief system. The western thought emphasises the concept of free will and self-development of character and righteousness, and pins the onus on the individual. The Indian belief system is based on the concept of “dharma”, which is doing one’s duty, irrespective of one’s situation. The concept of rebirth and doing one’s “karma” explains the basic nature of a mixture of good and evil in all human beings, and situations are opportunities to negate the collected “bad” karma of the past, in one’s quest to “moksha” or salvation. 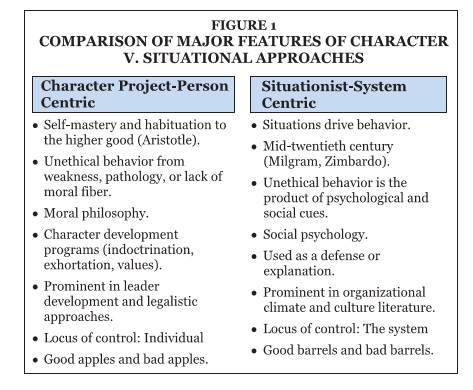 There are similarities and differences in the Indian thought and the western management model. The Indian concept of Leadership is beautifully encapsulated in the writing of mythologist Devdutt Patnaik:

“Svaha is what a yajaman (Entrepreneur / Leader) invests: goods, services and ideas.

Tathastu is the return on investment: revenue in the marketplace or salary paid by the employer.

It all depends on who plays the role of yajaman, who initiates the yagna. The yagna can operate both downstream, as well as upstream, so the devata can either be the buyer or the seller, the investor or the entrepreneur, the employer or employee, director or doorman.”

What works better is a situational decision. However, one can say that there are valid perspectives in both models and drawing from the best of those could enhance the principles of leadership character development. 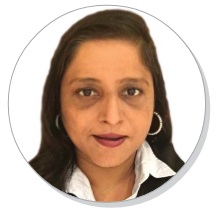