The Boss And The Man Friday

Many teams in organisations are unable to connect with their 'Boss', and hence, have to work with Man Fridays, who manipulate the flow of communication to suit their personal interests.

In organisations, there have always been instances where teams have found it difficult to connect with their decision-maker or the 'CEO', and are therefore forced to work with Man Fridays, who manipulate the flow of communication to suit their personal interests. These Man Fridays or 'Priests' account for very high inter-and intra-departmental friction in certain organisations, since they distort the communication coming from the Business Head. This leads to a situation where the employees begin to hate the top management or the CEO, and instead rub shoulders with the Man Friday, because he projects that he understands their plight, but is helpless. This leaves the populace with no alternative apart from 'cajoling' the Priest, if they have to see their 'God.' On the other hand, the Priest would have presented a completely different picture about the people and their expectations to the CEO, who would deem it fit to avoid any discussion whatsoever with those people, or worse, even avoid the people themselves.

Such 'Executive Assistants' operate by actually banking on the friction created by rubbing people's ego the wrong way. After understanding one's strengths and weaknesses, they will keep hitting at them in the guise of 'others'. Over time, this would end up creating a lot of hatred among the people in the team, to such an extent that they would avoid each other. In most cases, the victims quit the organisation and the culprit is never caught - and such double headed snakes continue to spew venom as the CEO's trusted Man Fridays!

Evidently, this is one irresponsible person. He holds a selfish motive, having been vested with the task of managing meetings and communication by the so-called leader, and ends up rather carelessly disarraying the team synergy. After a few years, when the truth is revealed, good talent would have left the organisation, and the ones who stay back are the 'birds of a feather' that flock together! Sometimes, the CEO is aware of most of the happenings, yet operates through his Man Friday deliberately, since he sees it as a way to shield himself from certain people in his organisation.

One would want to narrate a real 'office' story, which is a good learning experience. And the story is such that it will give the best of the soap operas a run for their money!

An organisation, a big brand with presence in three Indian cities and one branch abroad, had hired an Officer for one of their Indian branches, who later went on to become the CEO's Man Friday. This would-be priest was actually hired as an Office Assistant and not as an Executive Assistant. However, due to misinformation over his role during the selection, he was under the impression that he would be managing the city office all by himself. Since he had always worked as a branch head and as an individual contributor with small organisations in the past, he could not be blamed for assuming so. When he reported at the new office, he came to realise two things. One, an Assistant Manager who has joined recently is effectively managing the show in the branch, and two, the CEO has hired a Manager as the actual Head of the Branch. However, this Manager, who was supposed to join within a month, joined nearly after three months. Meanwhile, the CEO wanted that the Training Manager, responsible for the in-house training at all the four branches, to manage this branch until the Branch Manager joined.

The hierarchy in the organisation was as below: 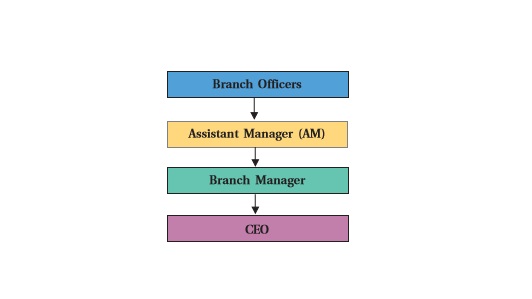 On the other hand, the Branch Officer, the would-be Priest, wanted to quit because he was asked to take over the job of an Office Assistant, which he considered to be below his dignity, as he had assumed that he would be the head of the branch. However, he was in two minds, as he had joined a big brand. The CEO wanted him to decide quickly, and had instructed the Training Manager to somehow ensure that the Officer stayed back. Every day in the evening, the Training Manager would counsel the officer, as a friend and a well-wisher, and the Officer was convinced to stay back. By this time, the Branch Manager had joined as well, and thus, the Training Manager could focus on his core areas for which he was hired.

However, the real problem started now. It turned out that the CEO had hired an Officer who was better than the AM, and the AM was way better than the Branch Manager. And each of them thought that they are better than the other, and hence, it was a circus of sorts every day, with each fighting for his own survival.

The Training Manager, though not a branch specific resource, was being held in this branch for operational / logistical convenience, and hence, was seen as a threat and an unwanted resource by the branch employees. The heads of the other branches held a similar feeling since he would be eventually working with them in their branch, thus sharing the limelight with the respective branch managers. He was forcibly dragged into a fight almost every day by the folks working in that branch. Since he was the common threat for everyone, they ganged up to throw all the blame on him for even the slightest failure in their branch, stating that the failure had occurred owing to poor training.

The CEO understood the selection and placement errors in the resources he had hired. However, his ego was stopping him from owning it up and rectifying it. In fact, people in all the four branches started losing respect over the CEO's judgment. He foresaw his grip becoming weak on the team, and hence, made his move by making the Officer of the branch in discussion his Personal Assistant, rather than the Office Assistant for that branch. This gave more power to the Officer, as he became the CEO's Man Friday. At the same time, this ensured that the CEO cut direct access between him and the respective heads.

In a nutshell, the Officer became the 'Priest', and he did everything possible to vent his frustration on everyone in the organisation, since, during his initial few months, he was forced to take up something much lesser than his expectations. And within a span of a year, there was an attrition of around 40%, which included the Training Manager, who in fact had helped all the branch heads by shouldering their share of work to win a place in their branch.

In an organisation ailing with deep-rooted people challenges, the HR department may have thrown a blind eye, or worse, may be one among the disillusioned lot. Irrespective of the size of an organisation, any individual works with not more than ten people shoulder-to-shoulder on a daily basis. Is it truly difficult for the leadership to facilitate a level-playing field for their folks? Or is it that, the bigger the brand, stronger is the thought that - whose battle is it anyway?

SHARE
Keshav Sridhar is a Business Consultant & OD Specialist. A seasoned HR Professional, he comes with an experience of 15 years and has worked with Google, Partygaming, BITS Pilani etc. and has been a Training Consultant for many Educational Institutes and Corporates. Keshav is an Engineer and has done the Certified Learning & Development Manager and Master Trainer & Facilitator programmes from Carlton Advanced Management Institute.