Change Management Is a Band-Aid on the Wound of Bad Leadership: Paul Gibbons

Paul Gibbons isn't here to just inspire you; he's here to challenge you. A scientist by background, Paul isn't a fan of empty platitudes and management doublespeak.

As a public intellectual, bestselling author and global expert on change, strategy and leadership, he is successfully steering an effort to use contemporary science and philosophy as provocations for busting myths, debunking pseudoscience, making better strategic decisions, implementing 21st-century change, and creating organisations where talent flourishes.

In this exclusive interaction with Human Capital, Paul talks about change agility, digital transformation, behavioural science, and the fascinating surprises the pandemic has uncovered.

You have charted an unusual career path to becoming what you are today. In what ways have your varied experience in the fields of science and math, economics, neuroscience, psychology, and philosophy helped bring new perspectives to the business arena?

I must be honest; I find most business books trivial. I cannot remember the last one I read (oh yes, it was Switch, an excellent book), although, in the 1990s and 2000s, I probably read 50 a year!

My study is in philosophy, history, other humanities, economics, and anthropology. I’m a scientist by background, and I read three science magazines a week on top of four to five philosophy and economics publications.

However, one exception is neuroscience. This was a fad a few years ago.

Many coaches and consultants talk about oxytocin and substantia nigra and so forth, but that is like figuring out how a car works by studying the chemical formula for octane. Good luck with that!

A great example is a couple in marriage counselling talking about their serotonin receptors – is that really helping? It’s like saying, “Darling, when we argue, my 5HT receptors in my ventromedial prefrontal cortex can’t cope.” Get real!

But gurus leapt so quickly onto the bandwagon trying to sound clever, throwing around words that are mostly unhelpful when it comes to running businesses.

My mission, because I read so widely, is to create better leadership for better businesses and a better world. I try to do that by bringing perspectives well outside what business school professors and consultants discuss. I think business thinkers need to read more widely – the worlds of science and philosophy have so much that can be made practical!

From small start-ups to multi-national corporations, no one has been spared the wrath of COVID-19. The pandemic has forced organisations of all sizes to adapt and evolve quickly. Could you share your reflections around the ongoing crisis?

First, I’m humbled by how humans have reacted – except a few leaders. We’ve found new depths of altruism and sacrifice for the greater good Most interesting is how quickly change has been able to happen.

If you had said to a bank CEO in December 2019 that 100% of her non-frontline staff were to be working from home, she would have laughed. For decades, the world has been inching towards more virtual enterprises – then in March, poof! It was a reality.

In a second black swan event, the death of a not-famous black man in a small US city sparked global uproar against racism. We again witnessed a rapid, empathetic human response: a tiny event in the grand scheme of things alighting new commitments to social change. I’m inspired.

What is interesting is that the change literature focuses on how non-adaptable humans are – how much they resist. However, we have seen huge untapped reserves of resilience, commitment, and change capability.

My great passion now is how ancient spiritual ideas from philosophy and Eastern and Western spiritual traditions can be harnessed to make workplaces better for humans. My new book is called Spirituality, Work, and Capitalism – perhaps out in September this year.

Getting started is often the most difficult part to move along the path of digital transformation. Where and how can companies begin to make digital changes to their business? Also, are there any pitfalls to look out for?

Now you are going to drag me back to talking about business. Okay!

The problem with digital transformation was unlikely to be whether companies could capitalise on the opportunities it presents. We’ve seen discontinuous changes as shopping, teaching, exercise, medicine, and communications moved to digital formats – seemingly overnight.

The bigger problem was always whether societies and companies could adapt workforces to the substantial shift in manpower requirements – whether we could handle the fact that by 2030, perhaps as many as 50% of jobs will have changed or ceased.

Now, thanks to COVID, the problem is greater – because it comes not on top of full employment in the West but double-digit unemployment. This societal challenge is the biggest pitfall. Western companies were never good at protecting workers from downsizing, or outsourcing, or technological change. The challenge is greater today, and I worry that we will not rise to it.

You often say that digital changes are paradoxical in several ways. Could you elucidate this point of view?

Technology is racing ahead faster than we can keep up. Data are being mined and crunched faster than strategists can adapt business models and more quickly than humans can adapt to perform their roles in the techno-human system, be that medicine, commerce, or government.

Weirdly, humans are a bottleneck.

Two hundred years ago, data moved as fast as the matter (paper) it was printed on. One hundred years ago, analogue electronic communications meant voice could travel at the speed of light but only as fast as I could speak. Today, I can transmit the whole US Library of Congress in an hour (digitised). However, our brains don’t work any faster than they did 10,000 years ago! That is partly why we feel so inundated.

Another paradox is that even though the change looks like a technological challenge, at the bottom, it is a human one. It leaves us with the questions: What is our superpower? What are the unique challenges that the machinespecies (robots or AI) cannot solve?

The change paradigm has forever been to strategise the change top-down, and then align people as needs require. It has never worked well. We get change failure and change fatigue. I’ve often said that change management is a Band-Aid on the wound of bad leadership.

Were our leaders up to sharing vision, cascading objectives, sharing the big picture why, resolving conflict, helping their staff adapt – then we would not need change managers putting out change fires. That is change agility, or one dimension of it – an organisation with change capable leaders at every level.

In what ways could behavioural science help leaders wield new tools to step up their organisational change efforts?

We used to think, change hearts, minds, and values, then behaviours will follow – except they don’t. So, to effect behavioural change, we would train, teach, inspire, and persuade – all of which produce the change inside people’s heads. Then, we’d shake our heads, thinking, why are people still doing what they always did?

As a highly regarded author, speaker, educator, and thought leader, you are an inspiration for many. Who currently inspires you, and why?

First, a joke. I once asked a famous actor, “Who inspires you?” and he said, “Me!” After I rolled around the floor laughing, I asked again. “No – I mean, who else?” He thought very pensively and said, “Nobody, really.” I still laugh remembering that. And I’m still not sure whether he was joking!

There is still no better book on change than The Fifth Discipline (1996) – and Peter Senge has inspired me since I first read that (and have since read it three times.) He has faded from public view but is still, to my mind, a great thinker on the human side of the business, the ecosystem, and sustainability.

The thinkers I admire? The “who do you want to be when you grow up” people are Daniel Kahnemann (author of Thinking, Fast and Slow) and Steven Pinker (author of Enlightenment Now).

Elon Musk is a business leader I admire – whatever his quirks. He is singular in that all his businesses are dedicated to a better future for humankind: Tesla, SpaceX, The Boring Company, and SolarCity. It seems to me that he chooses his entrepreneurial activity at the sweet spot between lucre and social value. He is also prepared, unlike many leaders, to take on projects that most people think impossible and that will take decades to realise. He was ridiculed for taking on the space establishment behemoths, Boeing, Raytheon, and Lockheed Martin with SpaceX, and it seemed even more ridiculous to take on Toyota, General Motors, and BMW – yet Tesla has.

As for political leaders, my choice has to be Angela Merkel, who sets an incredibly high standard for moral leadership. Think of how many scandals have plagued Trump in three years compared to Merkel in fifteen. And Greta Thunberg – the world needs more inspiring people like her – she gives me hope for humanity.

What would we be surprised to learn about you?

As a teenager, I used to be called “Disco Paul” because I loved going out dancing so much. Shh! That’s a secret. And I was 20 kilos lighter – which helped. In my 20s, I taught myself four languages (all European, no Hindi or Mandarin sadly) – so I can give talks, in theory, all over Europe. (The problem is I live in a tiny town in the mountains of Colorado where even English is rare.)

Today, I compete at mind sports at the highest levels – world championships. Backgammon when I was young, then Bridge, and now Poker – I’d love to win the world poker championship. I also love computer games like Civilisation and League of Legends. I suppose, in short, I’m the purest of nerds. In my downtime, I watch Netflix and anything sci-fi. 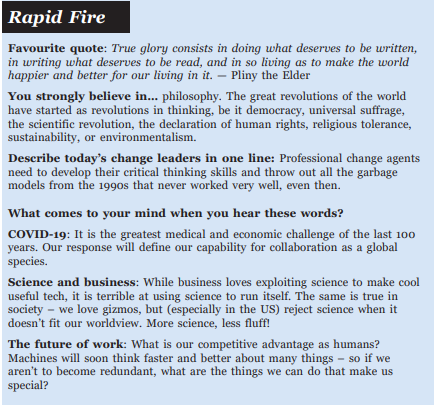 HR has now joined hands with the business in its truest sense: Satish Kumar

Define the job before the person: Lou Adler