The Fallacy of 'Right Pay'

In HR, especially in the functions of Talent Acquisition and Total Rewards, two difficult debates to put to rest are (a) the right pay range for a job and (b) the right placement of a candidate in that range. It is much simpler and easy to understand this in context of traditional public sector employers such as various government departments, railways, or armed forces because those institutions have defined pay scales based on post/seniority/rank/class of the employee. Even the routine pay scale revisions are centrally managed & announced by pay commissions, and components like DA (Dearness Allowance) are revised more frequently by way of gazette announcements. However, understanding the area of right pay in the private sector is quite a labyrinth to tread.

Yes, and no. Other than the usual factor of management level (Supervisor versus Manager), pay for a job in the Indian context varies across industries (like FMCG versus Iron & Steel), segments within industries (like IT product companies versus IT services), job families (Sales versus Finance), and locations (Mumbai being the priciest). Employers can purchase aggregate market data from various pay benchmarking vendors who provide the pay range data either by the vendor- defined levels and jobs catalogue or by the sponsoring company's job levels/titles.

Leaps between levels vary across markets

Market job pricing information based on benchmarking surveys gives some idea, but it is not enough to make an infallible decision about the right pay. Such data makes more sense in developed labour markets where the pay difference between least paid employee and function head could be just 10 to 20  times (say in the US, where ~$50K per annum would be the minimum wages versus a function head's pay that could be ~$500K per annum in fixed pay and similar in variable pay). However, in the context of India or other large developing economies like China, Indonesia, or the whole of South Asia, the gap could be exponential.

Market job pricing information based on benchmarking surveys gives some idea, but it is not enough to make an infallible decision about the right pay.

Let me illustrate this by an example of how job level pay progressions can vary significantly between markets.

These 9 distinct job levels, with about 25% pay progression at every level, can explain the difference between the minimum and maximum pay for developed markets like those in the US and UK. Look at a US example below (see exhibit 1), where the median fixed pay per annum increases by 25% with every level, except the highest level where it is 50%, culminating in a 7X difference between entry-level and function head pay.

In contrast to the above, the difference between the minimum and maximum salaries in India is quite exaggerated. The minimum salary is around Rs 150K to 200K per annum (pa). This is for entry-level paraprofessionals in lowest-paying occupations like in contact centres. Ignoring this career stream and considering only professionals, if we look at a fresh engineer in IT services, the salary range will be around Rs 350K - 450K pa. Moreover, the average salary of a non-promoter CEO of listed companies in India is Rs 64 million pa. Extrapolating this to CXOs, and taking a level progression of 100%, CXOs' average salary should be Rs 32 million pa. Further extrapolating it to the fixed salary, and considering variable pay at 100% of fixed salary, the pay of a CXO would be Rs 16 million pa or 40X entry-level pay. This huge gap leads to the pay progressing at an average of 50% between levels, and at some senior levels, it is even higher (75% to 100%). 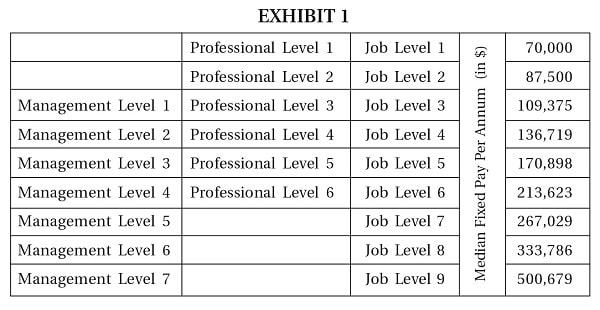 Wide range between min and max for the same job

The difference across functions at the same level

Interestingly, the same level jobs in different families and functions pay differently. Even if we cluster similar families, we find a difference of 85% between median pay of 5 least paying jobs versus median pay of 5 highest paying ones. If we derive  the  median pay of all the jobs at the same level (in similar clusters like IT and Telecom), we can conclude that hot jobs could command a premium  of  40%-50%  to the overall level median value, while vanilla skills could come  at  a  discount of 30%-40% to the overall median.

Pay for pedigree and person factor

There is always a premium for good talent, and not all this assessment is objective. A below-average student from a tier 1 college can land a job paying 3X of that of a smarter student from a less reputed one.

Other than pedigree, candidates develop their own employability brand as they mature in several jobs. Companies sometimes tend to hire highly reputed candidates who not only come at a premium for their pedigree and reputation, but also negotiate a further premium if the employer brand is not top-class or is on a downhill and needs image make over saviours.

Tip of the iceberg

Parameters described above are just a tip of the "compensable factors" iceberg. Other than the factors listed above there are various others that amplify the conundrum of right pay, including factors like lack of dynamism in taxonomy of next-gen skills, inadequacy of systems and processes to accurately slot employees in right jobs  and/or levels and to correct skill clusters, inaccuracy of job matching by total reward managers, scrutiny of the job mapping and pay data by aggregating vendors and the inability of talent acquisition associates to source the right level of experience and skillsets at the right pay level.

It is a universal bone of contention between reward and talent acquisition teams, where the former swears by their data sources and pay ranges developed using those sources, while the latter relies on last drawn pay of a small pool of interested candidates that they have access to.

Now familiar with the difficulties in assessing right pay of the jobs, please spend more time in better assessing the talent pool, tweaking your talent sourcing strategy, accurately mapping your company's jobs to survey provider's jobs library, revalidating that the job titles chosen for your open requisitions are indeed the most suitable from among  the available ones in your company's jobs catalogue, going over the results and comparing with the candidate pool data the recruiter is providing, doing your own research of talent market and job pricing, and most importantly, refraining from jumping to any conclusions about right pay for the candidate or the job. 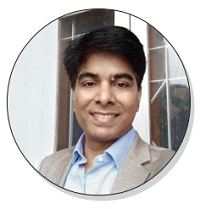 SHARE
Navneet Mukund is a Global Director of Compensation and Benefits with DXC Technology and heads the sub-function for India, Global Delivery Organization, and Global Total Reward Centre of Excellence. He is also responsible for Global Jobs Architecture CoE. He has 15 years of HR experience with FMCG and Hi Tech industries and has led country, regional and global roles for companies like Unilever, IBM, Cargill and Citi bank earlier. Navneet is an MBA HR from XLRI Jamshedpur.