Building A Culture Of Intrapreneurship

An 'entrepreneurial mindset' is required within corporate confines to break the shackles and open forth newer doors for exploration in these times of heightened competition. And this is where 'intrapreneurs' come in.

Intrapreneurship is one of those words that does not feature in the Merriam-Webster dictionary. Not unlike its real-world existence where it seems to exist sporadically; in sparks and bursts. But the term Intrapreneurship is regularly heard in corporate boardrooms, management meets and executive training sessions. Interestingly, the word ‘intrapreneur’ has been defined in the aforementioned dictionary as ‘an employee of a large corporation who is given freedom and financial support to create new products, services, systems, etc., and does not have to follow the corporation’s usual routines or protocols.’

Now, the world is very familiar with ‘entrepreneurs’, ranging from the enterprising individuals who run the neighbourhood ‘mom-and-pop’ store to the risk-taking ‘fresh-from-B-school’ MBAs, who kickstart their venture literally from their dorm rooms. These individuals risk resources, be it money or time, and possibly, even their reputation to create something of value.

Most organisations (and teams within them) invariably fall into the ‘success trap’ - where they continue doing what has worked well in the past and fall short of evolving, which in itself is critical for long term sustainability. To prevent such a thing from happening, an ‘entrepreneurial mindset’ is required within these corporate confines to break the shackles and open forth newer doors for exploration in these times of heightened competition. And this is where ‘intrapreneurs’ come in.

Kaihan Krippendorf, the Founder of Outthinker, a growth strategy and innovation consulting firm, and the author of ‘Driving Innovation from Within’, has termed these individuals as ‘Internal entrepreneurs.’ Basis his extensive research in the area of innovation, he presents a very convincing argument that these intrapreneurs have brought in greater innovation and created more value in the world of commerce than the usually hailed entrepreneurs. He argues, ‘to tell the true story of innovation, we would have to say that employees conceive of innovations, communities composed of corporations and institutions build them, and then the competition takes over to scale them.’

Making of an Intrapreneur

Intrapreneurs are a rare breed and hence difficult to spot. More difficult, however, is grooming them and enabling them to flower. Because, when intrapreneurship does exist, it is no orphan. There is almost always a godfather (or godmother, if you will) who champions the cause and encourages its germination.

The challenge before Founders, especially in large organisations, is creating a culture where intrapreneurs flourish even as the corporate ship steers steadily towards the chosen destination for the achievement of unified goals. This is easier said than done. But, without letting the task seem too daunting, do remember that iconic institutions like 3M and IBM in the past, and Google and CISCO, in more recent times, have actually managed to do so.

The beauty also lies in the fact that they have done so consistently, and it has been rightly said that the intrapreneurial approach has ingrained into the very DNA of the professionals working in these organisations.

It is worth understanding how these organisations lead this thought. The approaches are diverse. For one, Google’s path-breaking approach of encouraging its employees to use up to 20% of their time towards passion projects is of course well known. This is the same approach that has spawned many globally successful products ranging from Gmail to Google Maps. In fact, without the latter, local transport could never be as seamless as it has become today. This innovation has in turn germinated entire business models around logistics, food delivery, bike sharing and a lot more, clearly showcasing how Intrapreneurship has an exponential impact on the larger world of business, similar to what has been observed in classic entrepreneurship.

The path followed by CISCO in this direction is markedly different. Since 2016, CISCO has rolled out the Innovation Challenge that encourages every team in the organisation to develop new concepts and products. Besides cash rewards, other benefits such as paid leaves are also on offer for winners for what has become an ongoing programme attracting very high participation. One of their most successful product innovations involving virtual video conferencing was borne out of this programme. So, while the approach may differ,

It is apparent that for intrapreneurship to flourish, there must be a concerted and focused effort, to encourage the intrapreneurial traits of an employee to be given wings.

But, what exactly are these Intrapreneurial Traits?

◆ Strong capability in spotting patterns: These individuals are able to connect diverse areas by identifying underlying patterns and ideate solutions that fit.

◆ Entrepreneurial: They have the risk-taking, innovative approach as most entrepreneurs do. They are anti-bureaucracy and aggressive and are able to push their way through.

◆ Connecting to Organisational Priorities: Given that they operate within corporate boundaries, they understand the internal power structures and navigate the same smartly in order to get things moving.

◆ Resourceful: By design, entrepreneurs push ideas or products that are not in direct sync with the organisation’s current core offerings, and hence, they need to be resourceful to persist in spite of tight budgets and resistance.

It is no surprise then that the league also identifies its assimilated members as being misfits, disruptors, tempered radicals and dreamers who do!

Basis their mathematical models, the league assists organisations in determining the League Intrapreneurship QuotientTM (IQ) of specific teams. The calculation is based on the analysis of four aspects viz. Work Environment, Leadership Competencies, Self Perception and Attributes & Influences. This League IQTM score enables organisations to take stock of the innovation level in their organisation and take constructive steps to increase the potential of the same.

Innovation experts and authors, Hugh Molotsi and Jeff Zias, share a well-researched and comprehensive methodology to build a sustainable innovation platform in their 2018 book, ‘The Intrapreneur’s Journey’.

The approach guides to build a culture of Intrepreneurship Engagement on the below pillars: -

1. Time and Freedom: Coming back to the story of Google, when organisations provide employees with time and freedom to explore their passion outside of their mainline KRAs, like how Google does, the environment facilitates creativity and fresh ideas. What is critical is to ensure that the time blocked for efforts towards innovation or passion projects should be within the existing working hours of the employees and not over and above. If it is the latter case, the likelihood of those efforts being reduced is extremely likely due to a negative perception that will develop.

2. Dedicated Innovation Team: Having champions within the organisation that drive the Innovation practice delivers a huge boost to driving new ideas. When there is sustained and open communication regarding innovation practices, employees are encouraged to be more engaged and bolder. A competitive framework within teams with rewards and recognition tends to motivate more employees to join in the movement.

3. Design Thinking: To enable employees to deeply understand the customer’s needs and create solutions for real problems. Empathy forms the bedrock that fuels the desire in the minds of employees to understand customers better than they possibly understand themselves. This involves rapid experimentation rather than building one standard product (or solution) to iterate.

4. Open Collaboration: 3M’s Post-ItTM is a classic example of an invention that has come out of this pillar. While a low impact, detachable adhesive was created by one scientist in one arm of the organisation, its application into the form of a bookmark or sticky note, was thought of by another employee of the organisation in another unit.

5. Experimentation: It is supremely important to provide the required tools and data to employees to experiment. Decisions taken at any stage are taken based on data and facts, and not emotions.

This approach encourages very rapid iterations based on customer feedback to create a product or solution that is as close to the customer’s requirement as possible. There is truth in the belief that many organisations end up selling a product (or service) which is very different from what they originally were conceptualised to sell.

6. Aligning the Organisation for Yes: Innovation is everyone’s job. Even with the presence of an ‘Innovation Task Force’ or ‘Next-Gen Technology Team’ or similar in the organisation, the aim should be for everyone to facilitate innovation and support, rather than create hurdles or be the ones raising doubts. When innovation becomes organic, and all employees start seeing themselves as intrapreneurs, there is increased ownership and commitment towards going beyond their job description-defined role.

Molotsi and Zias assert that such a platform built on these pillars will ensure that the organisations are able to utilise the biggest under-utilised assets in their organisations – the ideas in their employees’ heads. 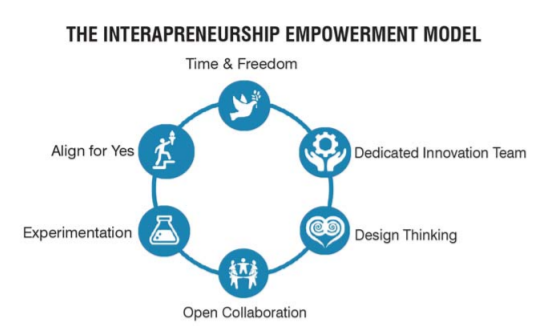 Adding to the list of organisations named so far, companies such as Tesla, Intuit, Microsoft, Apple, Amazon and many more, continue to innovate at breakneck speed aided by the focus on driving an intrapreneurial culture in their corridors. This is the reason that Apple managed to create an entire new product category with the launch of the iPad. This is also the reason that Amazon is as well known today as a provider of cloud services, as it is for being the world's largest store.

Therefore, at the risk of sounding cliched, given the hyper competitive business environment and the pace of disruptive technology changes, it is not a luxury anymore for leaders to create an intrapreneurial mindset in their organisations, it is a dire necessity. It would be prudent to pay heed to the words of Carl Sagan, renowned American astronomer, who said, "Extinction is the rule. Survival is the exception."

It is quite evident that in the 21st Century, organisations that are unable to foster a culture of intrapreneurship stand the risk of going the way of the dinosaurs, albeit in much shorter time spans.

2. 'Driving Innovation from Within' by Kaihan Krippendorf

3. 'The Intrapreneur's Journey' by Hugh Molotsi and Jeff Zias 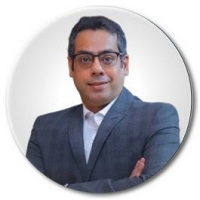 SHARE
Vikas Dua is an HR expert having worked in Wipro, Concentrix and Startek, driving hiring in the APAC region. He is currently the Chief HR Mentor at Attayn -a disruptive HR Tech firm. A TEDx Speaker, Vikas is also a Blogger, sharing insights under his self-designed 'HR in my Heart' brand umbrella.

Facets Of ONA In A Remote Working Era

Is Hybrid Work The Promised Land ?