The Changing Roles Of Managers In COVID Times

Feeling mentally comfortable is as bare a necessity as having a full stomach or getting enough sleep.

It was a Monday morning in April 2021, and Sam was getting started for work. Sam is a Senior Comp & Ben Manager at one of the largest banks in Mumbai since 2019. He is a diligent worker, a high achiever and has won the hearts of his peers and seniors with his amicable personality.

After the lockdown due to the pandemic, Sam has balanced the responsibilities at home and work pretty well. To avoid any Monday morning anxiety, Sam finishes any extra work on Sunday evening just to feel light. Every morning after completing his chores at home, he tunes in to his favourite radio channel while surfing through e-news apps on his phone, and then, by 10 AM sharp, starts work.

In the era of OTT’s convenience watching, radio always had a special place in Sam’s heart. It made him exist on the same emotional wavelength as many others who tuned in to the same channel. Like a kid, he started smiling when “Bare Necessities” by Phill Harris, a song from one of his favourite childhood movies, “Jungle Book”, played on the radio. It brought back a train of emotions gushing through his brain while the line “The simple bare necessities, Forget about your worries and your strife” were on a loop.

By the end, Sam’s smile faded, not because he knew that it was almost 10 AM and work would start, but because he knew he couldn’t continue with the happiness of that song at work. What was in the mind of a professionally content person like Sam that held him back from such a simple emotion—to be at ease with happiness at work? Is it only Sam, or is it the story of many of us?

Business and human endeavours are systems... we tend to focus on snapshots of isolated parts of the system. And wonder why our deepest problems never get solved.

Senge’s quote somehow relates to the manager-subordinate relationship and the changing role of managers in COVID times when the world is recuperating physically and psychologically from the backwash of the pandemic.

Presently, most organisations have gone into the remote-working mode to continue doing business and support people with their incomes. Virtual onboarding and virtual work have become the new normal. Like Sam, many of us switched to working from home. What are our primary touchpoints? The voice/video calls on our laptops and handsets. While 2-D interactions take up almost 95% of our attention while we work, there is the occasional call from the guiding light, catalyst and fuel to our remote working jobs – “Boss/Manager”.

Wondering how Sam’s boss is like? He is good, knowledgeable and supportive of Sam in all his professional endeavors but also pretty distant and indifferent. The remote working culture has brought people an elevated sense of time management as well as bestowing on the manager the responsibility to be there for team members even more. But how far have people managers been successful in creating “Happiness at Work” in a remote setup? Even for high performers like Sam, is that friendly and empathetic nudge not needed?

Empathetic Managers Up Their Game

Many of us could swiftly transition from working in an office to working from home because we were familiar with our workplaces and colleagues, but what about those who started their journey remotely? For them, their interactions with their manager make up the larger part of the reflection of the company’s culture.

Studies show an interesting phenomenon where people who lose one sense can gain near-superhuman abilities in another. This means that in the absence of a workplace, a person’s sensitivity to a voice call may increase, and these interactions with managers may become extra important. In this scenario, managers define who they are through their communication styles and daily interactions. Hence, the need for managers to ensure a wellbeing-focused culture really matters.

Managers need to change their mindset from ‘success is derived from performance’ to ‘success is derived from wellbeing-driven performance’. This is where I see managers juggling between multiple identities. Unfortunately, Sam was only connected to his boss as a co-worker. He could never open up emotionally to his boss, even when it came to negative emotions experienced at work, because he felt that empathetic space didn’t exist between them.

Empathetic managers can effectively place concern for the wellbeing of their associates and are one up over those who have low empathy. Cognitive empathy plays an important role in the workplace when emotional empathy may be lacking due to racial, ethnic, religious, or physical differences, even though they may not be felt due to the lack of physical proximity.

Excellence Meter and Kindness Meter: Are They Mutually Exclusive?

The mental state of a person can be a function of all the emotions felt after various events in the previous day until the start of the present workday. When people come to work, they are likely to be experiencing half of these emotions or even be hurting. So, what was hurting Sam? Our emotions at the workplace are often invalidated because we are supposed to behave a certain way. Restraint and balance can be executed at work, but authenticity and vulnerability are overrated?

Sam was always someone who was concerned with other people’s wellbeing, and he felt he also needed that, especially from his boss. Do managers want to push their subordinates when they are already distracted mentally? No. Does that help in tackling the work ahead? No. So, how do we balance work and emotions and try to achieve fluidity in an organisational structure? The oil in the structure is empathy.

As many thoughts created a whirlwind in Sam’s mind, he organised a meeting with his boss, explaining his need for a better work relationship. He suggested that they both create avenues for their whole team, where people get an opportunity to share. Sam suggested that his boss lead this initiative.

Sam’s boss was initially surprised, and only when Sam explained to him where he was going wrong did he realise that he could have been less indifferent and much happier himself if he had contributed to the team’s happiness sooner. Sam’s boss was in for the connect sessions. Sometimes, just a “talk” can work wonders! He then worked on a model to serve every emotional dimension that managers can work on. What organisations can do is create a space for kindness and recognise and reward those who champion this. Why should there only be an “excellence meter” but not a “kindness meter”? 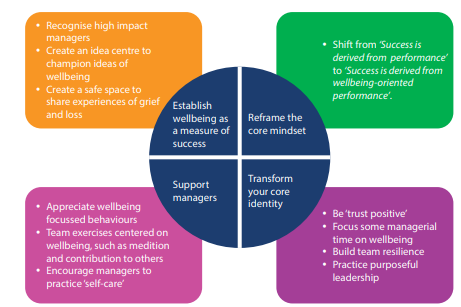 It Is Easier Than You Think

Studies have shown that self-empathy is a much-neglected area. The human brain has complex shared neural circuits in motor, sensory, and emotional areas that make it capable of understanding the experiences of others.

Neuroscience proves that we are naturally capable of helping others; then why do we suppress that capacity? The answer is that the rational brain does not want to give in to the emotional brain. Long-distance relationships contribute to trust issues, which lead to control issues.

Being “trust positive” and letting go can be overwhelming for managers. As Senge said: We tend to focus on snapshots of isolated parts of the system. And wonder why our deepest problems never get solved. This issue can be solved by self-empathy, which leads to the replenishment of an essential human capacity.

If we want to create an empathic society and a more compassionate world, enhancing our own capacity to empathise is critical to strengthening individual, team, and organisational bonds.

When a new employee joins an organisation, the value that is paramount is the promise to “care” for the employee under any circumstances.

Understanding self-empathy is essential and can help one provide empathic care to others. Self-empathy is at the core of wellness programs that are growing in popularity in many organisations.

Organisation-wide people development programs that include empathy training should become a priority in order to preserve and refresh the vitality of our people. Let us always remember that “Kindness begins at home”, or with the self. Feeling mentally comfortable is as bare a necessity as having a full stomach or getting enough sleep.

A month has passed by now, and it’s another Monday in May. Sam tunes in to his favourite radio channel again, and “Bare Necessities” by Phill Harris is playing again! Sam jumps a little bit with happiness, and that’s when he gets a WhatsApp notification in his office chat group. The message from his boss says, “Guys, let’s connect around 12ish to discuss this month’s get-together theme. I am excited to be your host!” Sam is smiling and continues to hum:

Look for the bare necessities

Forget about your worries and your strife

I mean the bare necessities

That bring the bare necessities of life

SHARE
Nikita Panchal sees herself as an agent of transformation, and it excites her to constantly push the boundaries of consciousness in herself and others. She is a Global Leader with over 18 years of experience in organisation development, talent management, diversity & inclusion, and creating future-ready organisations. She has worked for TATA Asset Management and Motilal Oswal Securities and is currently associated with ACG Worldwide, an integrated pharma manufacturing solutions company, as Global Head – Organization Development, Talent Management & Development, D&I.