Is Your Intelligence Making Your Decisions?

When we challenge our points of view, we can broaden our worldview and make better and more informed decisions. This begins with bursting our "filter bubble" to open up to new frontiers of ideas and perspectives.

Within organisations and families, we have multiple generations of people working and living together. A dipstick question that could be posed to each generation is: Who or what was the greatest influence during your childhood?

There may be different answers, but if they are classified into two categories of influence, i.e. (1) People with whom we grew up (family members, teachers, friends), and (2) Someone or something that is made known to us through the media — then it would be evident that the influence of social media is much more powerful on millennials, Gen-Z, and younger cohorts than older generations.

Emotional Intelligence and the Social Dilemma

The concept of emotional intelligence (EI) rose to fame when Daniel Goleman published the book 'Emotional Intelligence' in 1995. He introduced EI as the ability to identify and manage our own and others’ emotions, and use them to inform our actions and decisions. Since then, the world has dramatically changed over the last 25 years, and the need for EI has only intensified.

Managing emotions doesn’t mean ignoring them or bottling them up. It’s about understanding them, expressing them constructively, and using them to make smarter decisions. Yale research has shown that emotionally savvy people make dramatically better decisions — be it in work or at home.

The trouble starts when interacting with technology preys on our emotions and veers us away from reality, our own thoughts and feelings and those of others, thus swaying the decisions we make to become biased.

Amongst the fastest-growing organisations, Internet companies hold the top positions. The Social Dilemma — a docudrama which featured the once higher-ups at Twitter and Facebook, among others — created waves around the world for many reasons. It highlighted the business model of the social media companies and the myriad ways they warp our perception, twist our minds, and affect our decision making.

The documentary exposed some unsettling truths like “Your attention is the product being sold to advertisers” and “It [social media] is a marketplace that trades exclusively in human futures.” One of the most hair-raising arguments in the documentary was that computer processing power has gone up a trillion times from the 1960s until now. However, the physiology of human brains has not evolved at all.

I’m not here to demonise technology or ask you to delete your social media account forever. Social media is great in moderation.

However, here’s a problem most of us face: it’s incredibly challenging to use it in moderation! It is engineered to hook us, and we need to be mindful of its impact on our EI.

Going back to the dipstick, most of you would agree that people who influenced us the most gained trust and popularity mainly through their actions of empathy, communication and integrity. Here’s how technologies like social media can affect each of these skills and ultimately, EI.

After Donald Trump’s victory in the 2016 US election, many Americans who expected the results to go the other direction were in disbelief, asking themselves how they missed Trump’s popularity.

One answer is the “filter bubble” concept which went viral in a TED Talk by Eli Pariser, who defined the term as a “personal, unique universe of information that you live in online. And what’s in your filter bubble depends on who you are, and it depends on what you do. But the thing is that you don’t decide what gets in. And more importantly, you don’t actually see what gets edited out.”

We have a natural human tendency to surround ourselves with like-minded people. Highly curated feeds can have apparent upsides, such as the easier discovery of things in which we are interested. However, there’s arguably also a downside — it is less likely we will be exposed to different ideas and information that challenge our pre-existing beliefs.

While we are partially to blame for our personalised feeds — it’s not entirely our fault. The highly adaptive social media platforms’ algorithms keep feeding us content that aligns with our interests, belief systems, and the world we want to see. Most often, we don’t even realise this is happening.

“Confirmation bias,” or “myside bias,” is not new, but social media amplifies it. Living in a filter bubble online prevents us from peeking into the worlds of people who hold alternating viewpoints. Reinforcing our own beliefs ultimately hinders empathy by hardening us against others.

When we challenge our points of view, we can broaden our worldview and make better and more informed decisions. This begins with opening up to new perspectives, ideas and information.

While there’s little we can do to change existing algorithms, we can make personal strides toward bursting our filter bubble by following people on social media who hold a counter view, not deleting connections with whom we disagree (e.g., unfriending people with differing political views became common during the 2016 US presidential election), and approaching others from a place of empathy and desire to understand why they think and behave in a certain way.

“The one easy way to become worth 50 per cent more than you are now at least is to hone your communication skills — both written and verbal. If you can’t communicate, it’s like winking at a girl in the dark — nothing happens,” said Warren Buffet in a video posted by Michael Hood in 2018.

Several research studies highlight that the digital era is impacting our ability to communicate verbally. While technology is a convenient and efficient communication method, we need to be mindful of using digital communication as a crutch. This means courageously stepping out of our digital comfort zone to engage with people verbally when necessary. It is the fastest route to resolve conflicts or set clear expectations as a leader.

Also, instead of pulling out your phone while having a conversation with someone and descending into the Facebook black hole, become a better listener and be more empathetic to those speaking by engaging in device-free conversations.

It is proven that fake news on social media spreads six times faster than real news. As information and stories travel at lightning speed, people’s minds are directed to believe that reach and massive prevalence of a message make it authentic.

Awareness and intention are the keywords that could help us make decisions by using input from machines.

Google, Twitter, and Facebook are facing trials in the US for influencing users right from buying a product to electing the leader of a country. We have a huge responsibility to make the right choices largely depending on human intelligence and not machine intelligence, considering that the latter could be misleading with advertisements and content that are paid to be displayed to users.

The intentional actions of building the right habits of internet usage, being aware of social media manipulation, and bursting our filter bubble to open ourselves to new frontiers of ideas and perspectives can help us stay closer to reality and make the right decisions that are best suited for us and others.

Will we become powerful influencers to our current and future generations just like our earlier generations were for us? 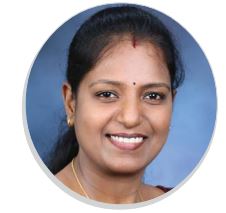 SHARE
Swarna Sudha Selvaraj is the Head of Talent Development for TCS Europe, UK & Ireland. She is a vibrant HR leader with over 17 years of work experience gained from association with TCS and Murugappa Group of Companies.